Flashback Friday: Number of the Beast 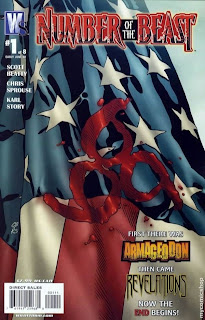 Number of the Beast
The recently-killed off line of comics, Wildstorm, for awhile had some of the most popular comics around. From Warren Ellis' Stormwatch to Authority, WildCats, Gen13, and other series of which I read pretty much none besides the Warren Ellis one. There was this big event, though, where the world ended. Normally when a comic line does something this dramatic it is having trouble selling and close to death. Well, that happened after this 2008 event. How was the comic that caused the end of the world though? I'd say quite good.

It took two pointless mini-series to get to the main event, but I didn't read them so I'm not too annoyed about that. This series was quite zany and starts with something clever. You see, the comic seems like a stupid golden-age comics rip-off with the heroes doing lame quips, facing silly villains, and such things. The genius bit, is that this is actually terrible on purpose as it turns out all these heroes are in a virtual world. Things go haywire when one of the few Wildstorm characters I know, The High (of the great Warren Ellis Stormwatch run), is introduced into this world and a series of events occur that result in the eventual destruction of the world. 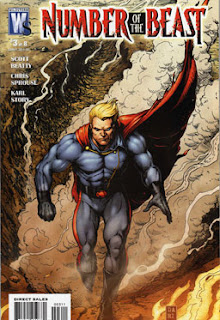 The writing is pretty solid and so is the art, making it sad how this series was sort of the death-knell for Wildstorm comics, although some good stories came out of this event for a short time before it all came to an end. This was an enjoyable if by no means spectacular comic, although I loved that meta-textual element of the heroes locked in a cheesy world.
3.5 out of 5 stars.
Posted by David Charles Bitterbaum at 2:00 PM