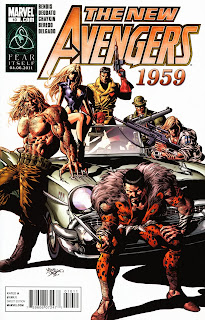 The New Avengers #10
In the present time the Avengers are breaking up secret villain lab whilst Mockingbird clings to life (as if she is really going to die right after being brought back during Secret Invasion) and in the past we have a weird story about the secret first team of Avengers that was put together by Nick Fury--which essentially changes a ton of past history if the first team of Avengers wasn't really the first.


Okay, try and follow me here because things can get a little confusing. This comic takes place in two distinct times, 1959 and the present. The past is illustrated by Howard Chaykin and the present by Michael Deodato--which makes for some distinctly different art styles. In the present the Avengers team is breaking up a group of defunct H.A.M.M.E.R. agents from "Normal Osborns" former organization (I say "Normal" because that is what the intro text put. Hasn't this happened before in the Osborn comic itself too) led by a villain named Superia. Superia dresses very suggestively and has energy powers, other than that we know pretty much nothing about her. In the 1959 scenes a then-younger Nick Fury and Colonel Dungan are putting together the first-ever team of Avengers in secret, with it made up of various old-timey Marvel heroes or ones that don't age much so while still around today they also existed in the past. Oh, plus the comic costs $3.99 despite only being 22 story-pages not counting the initial recap. Marvel can claim this is because another one of those "Oral History of the Avengers" pieces I never read are in the back of the comic. Are you with me so far? 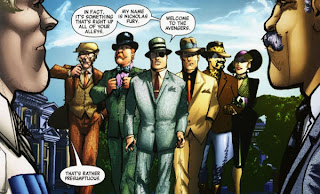 I'm not super-nerdy about continuity, but it is odd that Bendis is essentially re-writing half a century's worth of Marvel history by claiming there was a first secret team of Avengers made up of a weird assortment of heroes--Sabertooth, Dominic Fortune, Kraven, Namora, Ulysses Bloodstone, and Silver Sable. They are supposed to take on the Red Skull because he is creating a super-weapon of sorts. This is interesting and all, but I still have no clue how these two seemingly completely separate stories relate to one another in any way at all. 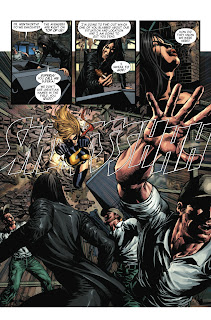 Overall this a decent comic. The art is nice--especially with Chaykin's unique style--and the two stories are interesting even if they seem to have no relation as of now. Yeah, decent, but I'm not impressed either--and for $3.99 I expect better than merely good, but that's it own topic. If you count price your evaluation of a comic though, knock off half a point of my review.
3 out of 5 stars.
Posted by David Charles Bitterbaum at 11:00 AM