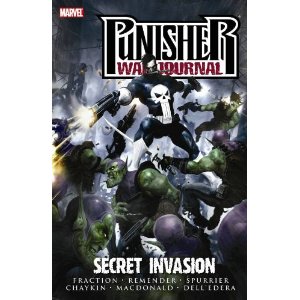 Punisher War Journal Volume 5: Secret Invasion
I said this would come out late yesterday, but instead it will be early today. Sorry!
Before the Punisher re-launch that came out of Dark Reign and led to the new mini-series "In the Blood" there was the Punisher War Journal series that started out as being written by Matt Fraction but then was joined by Rick Remender (who has been the writer for the new Punisher series and mini-series). While the newer series was great whether it was Frank fighting The Hood or turning into Frankencastle, War Journal was a bit more hit-or-miss. Sadly, after the solid preceding Volume 4, this final volume would count as a "miss". Why? Let's discuss....

Punisher War Journal started out of Marvel's Civil War, then brought in a New Hatemonger, had some business with World War Hulk, Kraven's son, and just when it seemed subpar, knocked one story out of the park with a great arc about Jigsaw and how he hates Frank, but also deep down wishes he were and him and even loves in a twisted way. That ended with Frank going to prison, but it doesn't last long because at the start of the two issues that deal with Secret Invasion (#24 and #25) Frank breaks out and starts doing what he is great at--killing things. There is some interesting looks into Frank's mind, such as how he is actually happy in a way for the alien invasion because it results in a land where he has almost nothing but targets, but sadly the story gets bogged down in how his former assistant Stuart Clarke wants Frank dead for killing his girlfriend back in second story arc with the all-new Hatemonger. 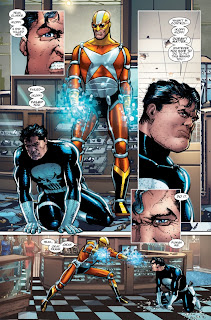 The whole point is that the Punisher is dangerous to everyone when he's not in control of himself...well yeah, that's how it is for many heroes, just look at the Hulk when he is at his angriest! Plus, these two issues are essentially just a bunch of fight scenes, good-looking ones thanks to artist Howard Chaykin, but still just action nonetheless. Whereas the previous volume looked deep into the Punisher's psychology about criminals and Jigsaw, this just is a bunch of explosions. The ending is a bit of a cliffhanger with Stuart Clarke becoming another Jigsaw-looking bad-guy, and this plot point wasn't picked up on until the new "In The Blood" mini-series, showing that Remender at least did have plans for Clarke as far back as this story. Still, just nothing too solid. 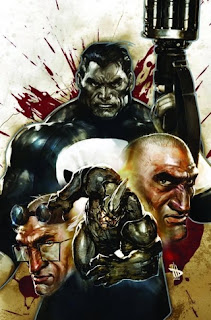 Issue 26 is the last of the series and Christmas-themed. It has the Punisher contemplating killing some guys who want to take over the mantle of stilt-man, but Frank's sorta-friend The Rhino talks him out of it. That's pretty much all that happens, yeah, a weak end to the series. Oh, and in addition there is the Punisher War Journal Annual, which is moderately fun with Frank hallucinating a day-glo type world and trying to keep it together. If you ever wanted to see the Punisher shoot someone who looks like a unicorn this is your comic. There is also a clever bit at the end where people tripping on Frank's mind go insane from the trauma--showing he is either very strong-willed to live with all the hate he has, or just better than most at hiding the madness.

Overall this was a weak way to end the series and while it isn't terrible, things are overall mediocre--and just barely thanks to the clever annual.
2.5 out of 5 stars.
Punisher War Journal - Volume 5: Secret Invasion (Punisher (Marvel Quality Paper))

if you still want it.
Posted by David Charles Bitterbaum at 12:20 AM