Yet Again, "Skull and Bones," is Delayed 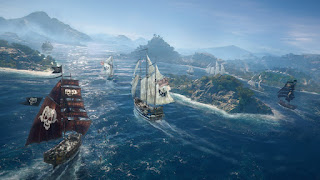 I have written about the pirate game, "Skull and Bones," and its development Hell at various points in time. Announced in 2017, I wrote about how it sounded like it was suffering huge issues in 2020. Then in 2021, I wrote about further problems. Oh, and in October of 2022, I wrote about how it had supposedly its last delay to March 9th of what is now this year, 2023. Guess what, ya'll? The game is delayed until the next fiscal year by its publisher, Ubisoft--meaning it won't come out until at least after April 2023.

"Skull and Bones," has morphed so much during its development that I'm not sure what exactly it will even be when it does come out. A single-player open-World action RPG? Multiplayer pirating combat game? Something that has a long grind as you level up but you can buy advancements with real money too via in-game purchases? I seriously just want a fun pirate game like we saw in a tiny bit of, "Assasin's Creed III," and the better parts of, "Assassin's Creed IV." We'll see what exactly we get from, "Skull and Bones," when it does come out. I just hope it is enjoyable as opposed to a Frankenstein's monster of ideas horrifically stitched together in a broken manner.