Frankie's Comics Files for Bankruptcy/The Beginning of the End for Store Variants? 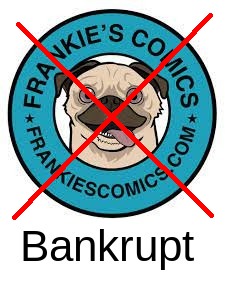 Frankie's Comics, an online store specializing in store variants, has declared Chapter 11 bankruptcy. A, "Store Variant," is a variant cover for a new comic exclusively sold by one or a handful of stores. They can have great artwork but usually have zero value to speculators or such. They look good though and have been popular at points. I guess the popularity has clearly waned, though.

I saw the bankruptcy discussed in some comic forums I frequent and then Bleedingcool made a post about it today as well. According to the paperwork, Frankie's owes about one million dollars to companies ranging from comic distributors such as Diamond and Penguin Random House to Paypal. Artist Ivan Tao is due $6,000 as well. One sticking point is that Frankie's isn't going out of business (in theory) with a Chapter 11 filing but can fix things and then supposedly get back on track. I doubt many companies would want to trust them again, however. It also sucks that Ivan Tao can't even be paid the 6K he is owed while they actively sell the comic he made the variant cover for--that personally strikes me as sleazy.

Full disclosure, a couple years ago I bought some fun store variant covers from Frankie's and other retailers off-and-on but I quit buying them as they just took-up space and basically cost a premium for the same comic you can get at any store with a slightly cooler cover. Having your business do essentially nothing but store variants just sounds like a bad idea, and Frankie's owing more than a million dollars to a bunch of people makes me wonder if we are at the beginning of the end of the store variant era? At one point it seemed every comic store was doing a store variant for the latest hot comic, but the market has significantly cooled and folks aren't spending nearly as much on, "Key," issues of comics, let alone brand-new store variants.

I will be watching with great curiosity if Frankie's Comics can weather this bankruptcy and emerge stronger and solvent. If they truly end up out of business, however, I do wonder if other retailers that specialize in basically just store variants will find themselves in trouble too.