"The Journey Of Marcel Grob," Is a Fascinatingly Tragic Story 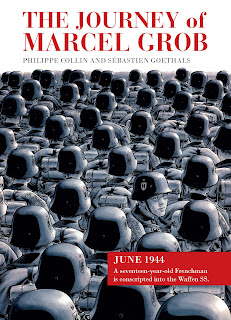 I am on the press list for the publisher Dead Reckoning and always enjoy the historically-centered comics they release. Their latest original graphic novel is, "The Journey of Marcel Grob." It is an intriguing piece of historical fiction, opening in the year 2009 as 83-year-old Marcel Grob finds himself questioned about ties to the Nazis back during World War II. Was he forced to join the Nazi army and did his best to not hurt anyone, or was he a willing volunteer who eagerly committed war crimes? Author Philippe Collin and illustrator Sébastien Goethals explore Marcel's story as he discusses to a judge why he was conscripted from the German-speaking region of France known as Alsace but had zero desire to actually be a Nazi.

Collin does an expert job at showing us what it must have been like to be a regular civilian terrified that an occupying force is making you join them--and you know they're the villain but can do quite little about it. The Nazi's were unquestionably evil, vicious, and terrible, but Marcel is stuck among them trying his best not to end up on the wrong end of any fellow soldier's rifles. 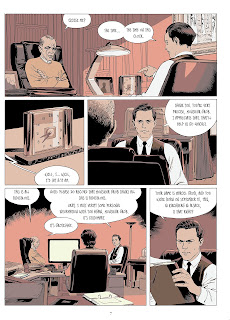 It also really struck me was how superb Goethal's art was. The present is illustrated in a crisp and clear style, but as we move into the past things are a bit more loose and hazy, just as the memories of long ago would be in a symbolic sense. Goethal draws the beauty of the sun over a beach with the same careful precision as horrific scenes of villages being massacred.

There is a chapter of text at the end of the book featuring a descriptive historical account by Christian Ingrao--a specialist in the history of Nazisim--which breaks down the very real incidents portrayed in the book through the eyes of the fictional Marcel Grob. It makes it discusses how his story of being forced to join the Nazis was that of many French in Alsace who then had to deal with shame and embarrassment for the rest of their lives when it came to what they did during World War II. 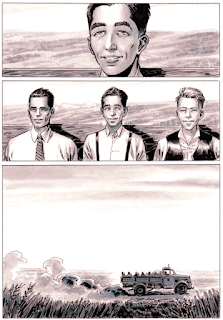 "The Journey of Marcel Grob," is a beautifully done portrayal of a grotesque time in history. Collin's writing and Goethal's art are both superb and Ingaro's breakdown of the history itself serves as an insightful epilogue to the book. I'd rate this publication...