Don't Do Those, "Pass it On," Food Chains at Drive-Through Restaurants 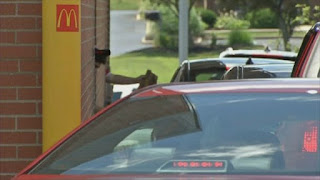 Those chains where people pay for the car behind them at restaurants sound nice in theory but in practice are awful. One time the car ahead of me at Arby's (don't judge, it tastes good) paid for my meal and wanted to pass on the message that, "I am loved." That was nice. No one was behind me. Therefore, I wasn't even asked to pay for the next car. Can you imagine if someone who was struggling to make ends meet had ordered a small meal and then was asked to pay like $50 for the car behind them, and pressured to look rude if they didn't do it, however?

The whole thing is absurd and I agree with folks like Darius who posted a video online decrying the whole, "Pass it forward," food chain. Sometimes people can't afford to pay for others or maybe they just want to pay for their own meal and if it is covered, great, but why pressure them to make it some kind of chain? I'd instead take the money I saved at the restaurant and donate it to a charity close to my heart or such. For example, the Ronald McDonald house is a fantastic charity and I always round up my total at the drive-through or put some dollar bills in the donation box if I'm inside a McDonald's. If someone paid for my meal there I'd decline to pay for the next person, but eagerly give my total to a charity that helps others.

Employees at many locations hate these chains too, with them observing you could, "Tip instead," when driving through Starbucks or other locations with tips. Not to mention, the whole process can be confusing for people trying to ring up orders. When the employees at a restaurant hate the whole, "Pass it on," chain that just further emphasizes how bad an idea they are.

If I pay for the car behind me at a restaurant for any reason, I will emphasize that the drive-through is to tell the person they are not to do it for the next car according to my request. I wanted to treat them and don't want them to feel pressured to create a chain or such. That's a true act of kindness and I'd encourage everyone to do that if they really want to pay for the car behind them, or tip extra/donate to a charity if they get treated. It is a lot easier than some wonky super-long chain.