Comixology as We Know it Has Been Destroyed 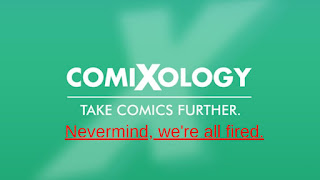 Back in 2014, Amazon bought a big source of (legal) digital comics, Comixology. I argued it wasn't a huge deal because Comixology wasn't the only source of legit digital comics and physical comics would be fine. Well, I was half-right.

Physical comics are still doing fine but Comixology grew and grew to be the main source of digital comics. Then they changed the whole format a little bit ago and everyone was really mad. Now, Comixology has been suddenly slaughtered by Amazon via a bunch of layoffs impacting the whole company, but especially Comixology. I'm not joking, it is being called a, "Bloodbath," as 75% of the staff is gone with the other 25% to follow during the rest of 2023. As of now, a skeleton staff is keeping things somewhat functioning before whatever mysterious step comes next. If everyone is getting laid off then Comixology as we know it is being dismantled. What is next, though? Nobody knows, but I imagine things are only going to get uglier before answers arrive.