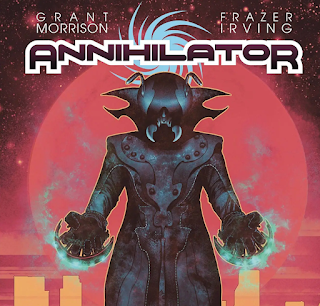 When folks discuss the works of the great Grant Morrison there are a lot of works to consider. You've got their massively popular stuff such as, "All-Star Superman," "Animal Man," a run on, "Justice League," a bunch of, "Batman," "Invisibles," "Multiversity," a brief tenure at Marvel with the fantastic, "New X-Men," and plenty of other well-regarded projects. There are somewhat-known works that are also fantastic such as my all-time favorite comic, "The Filth." Then you've got deeper cuts that seem to get overlooked such as his mini-series with artist Frazer Irving, "Annihilator." Long since collected in hardcover and trade paperback, the comic follows the story of a screenwriter named Ray Spass as he deals with a terminal diagnosis at the same time as he attempts to finish writing a big blockbuster film starring fan-favorite character Max Nomax. Then Nomax suddenly appears in the real world and things only get stranger.

I quite enjoyed, "Annihilator," when it was coming out and rated the last issue (and basically the series overall) a solid 4 out of 5 stars. It was by no means the absolute best thing Morrison has written, but it was a damn fine comic. I was reminded about the series with a recent article by D. Emerson Eddy of Comicsbeat that had me dig out my old copy of the hardcover. Thinking back on it now I am intrigued it remains a lesser-known work by two fantastic creators. I'd definitely recommend seeking it out if you like when Morrison gets all trippy and weird or enjoy the artistic stylings of Irving.

Posted by David Charles Bitterbaum at 10:01 AM