Alright, the Saint Louis Loop Trolley is Kind of Cute 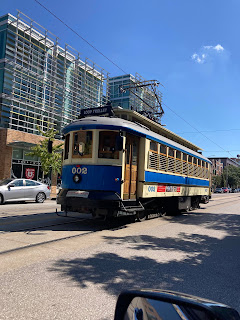 In Saint Louis there is a popular area known as, "The Loop." It has lots of restaurants, stores, and other fun stuff. Some years ago they tore a bunch of the street up to have a trolley that ran from the Loop over to the Missouri History Museum. Everyone hated the idea and the trolley was a flop. It quit running 2019 because it was hemmoarging money. Then, Saint Louis was informed if they didn't run the trolley a whole bunch of government funds that were given to the region to build the trolley would be owed back.

Therefore, not too long ago the trolley came back and now is running on its little track for free till October 30th. I assume come that date they'll try to charge for the trolley to little success or just shut it down again until the government threatens consequences. Clearly, I am being very snarky about the trolley, and if you look around online or ask people in the STL region you'll find plenty of other folks who have been against the thing from the start. I actually was in the Loop on a day the trolley was running this week, however, and it actually is kind of...cute? 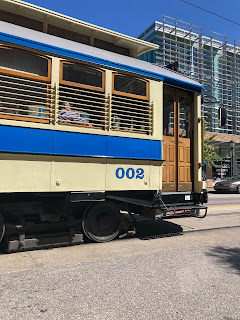 Yes, the Loop Trolley is more of a kitschy thing for tourists than actually useful as a form of mass transit, but it is kind of fun to see passing by. I snapped the pictures you see in this article and it is kind of neat to witness the trolley. It still is reviled by many, but at least it has a bit of visual charm.