CGC to (Finally) Recognize Newsstand Variants in Their Grading 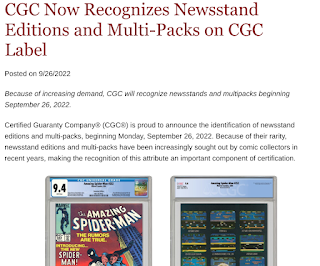 There was a period of decades where differentiation was made with comics (especially on the cover) about if they were meant to be sold in comic stores (direct market) or at newsstands, drug stores, and so forth (newsstand). At one time, newsstand comics outnumbered direct market copies, but for a lot of years--as the market for comics outside of comic shops shrunk--newsstand variants became less common to outright rarely published. Some people like to specifically collect newsstand variants and depending on the era they are from and their rarity, newsstand variants can command a bit extra value. 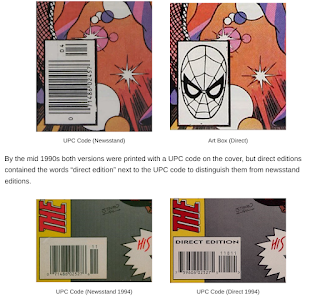 A part of me is happy CGC is finally doing this and another part of me wonders if they know it'll get them some extra funds as plenty of people who already got their comics graded will now send them in for a new case that denotes the newsstand variant--and pay a fee for it. Still, I guess we shouldn't like a gift horse in the mouth. Oh, it is also worth being aware that special, "Multipack," comics will be noted too, although that's arguably an even smaller niche than newsstand collectors. CGC took their time getting to the point of actually noting all newsstand variants, but at least now they're starting to do it.