The First Issue of, "Vanish," is an Entertaining Hodgepodge of Ideas

Donny Cates and Ryan Stegman had a quite successful run on, "Venom," and as a creative team gained a lot of fans. They must have enjoyed working together as now they're bringing us a creator-owned series from Image titled, "Vanish." It is a combination of a ton of ideas that throws everything at the wall trying to see what sticks. It works for the most part although whether it sustains the kitchen-sink approach or falls apart will be seen with future issues.

This first issue brings us a school of magic in a mystical and technologic wonderland, makes fun of the, "Chosen one," trope, involves superheroes, reveals a dark truth about the superheroes, and gives us a villain who is actually kind of a hero to a foole populace. Basically, the comic what you could get if you jammed, "Harry Potter," "The Boys," "Spawn," "Star Wars," "Invincible," and other stuff I didn't immediately feel the vibe of in a blender and mixed it into a weird but somewhat tasty smoothie. 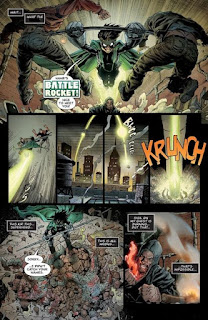 Oliver Harrison is the aforementioned chosen one who saved the day a long time ago but has been on the lookout for evil forces that still remain. Those forces disappeared forever ago so now he's mostly just miserable and washed-up. It turns out (spoiler) that the heroes in the city are actually the viallins that tried to destroy everything years ago but now in hiding, so its time for Harrison to kill these baddies who vanished all those years ago.

Stegman's art gives off strong 90's Image vibes as other websites observed too. The way the panels are set up, everyone is swearing or edgy, and the heavy uses of chains as a weapon really drives home the retro (I guess the 90s are retro now) sensation. It works though! You'd think so many ideas and story concepts smashed together would be a nasty and formless sludge, but the many turning gears manage to work together and give us an entertaining debut issue. I run hot-and-cold on Cates but I'm hopeful, "Vanish," can continue to use its mish-mash of ideas in a manner that tells a cohernet story. I know with Stegman involved it'll at least look good whether it stays focused or goes off the rails.