I like the music of Ariana Grande. I've been a fan for some time. I first wrote about, "The Way," back in 2013 and discussed my fondness for such jams as, "Thank U, Next." There have been two songs by Grande that have become very popular lately and one is great while the other is pretty bad--in my opinion, at least. We've got, "Switching Positions," which has catchy strings, a killer beat, Grande singing and rhyming with expertise, and it's just stellar. Then there is, "34+35," which doesn't have metaphors so much as just outright dirty requests, a flimsy beat, and it's just drab. I don't mind dirty songs by any means--"WAP," is catchy as hell and extremely raunchy.

It's a tale of two Ariana Grande songs where one is amazing and the other is just lame and I'm surprised the same person who sings, "Switchin' the positions for you/Cookin' in the kitchen and I'm in the bedroom/I'm in the Olympics, way I'm jumpin' through hoops/Know my love infinite, nothin' I wouldn't do/That I won't do, switchin' for you," then has such snore-worthy lyrics as, "Can you stay up all night?/Fuck me 'til the daylight/Thirty-four, thirty-five (Yeah, yeah, yeah, yeah)/Can you stay up all night? (All night)/Fuck mе 'til the daylight/Thirty-four, thirty-five (Yeah, yеah, yeah, yeah). For those unclear, 34 and 35 make 69. Yes, she made a goddamn joke about 69'ing and that's the whole point of the song. Again, I love a good dirty ditty, but make it interesting and have a solid beat or melody to match it. 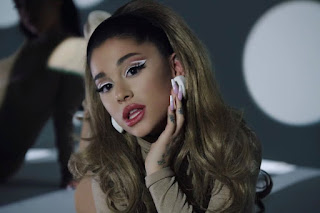