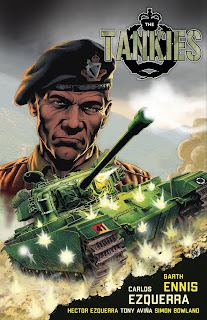 Garth Ennis is a comic creator who loves to write war comics. He excels at them and while some of his superhero work is where a lot of his fame has come from, I think if he were allowed he'd do nothing but write war comics. Carlos Ezquerra was a fantastic artist who collaborated with Ennis for a war comic known as, "The Tankies," which followed an assortment of characters who piloted tanks in WWII as well as the Korean War, with the link between the stories being Corporal Stiles, then Seagrant Stiles, as he tried his darndest to get his tank crews alive out of some seriously nasty battles. "The Tankies," has been collected in one big and impressive trade paperback by publisher Dead Reckoning and I was fortunate enough to acquire a copy for the purpose of review.

What else is there to say about a Garth Ennis war comic besides that with his immense knowledge of past wars and ability to write compelling characters that Ennis does a fantastic job making us care about all the Allied characters we meet--especially the link between all the story arcs, Stiles.  Ezquerra was a skilled illustrator too, with his drawing of the other main characters besides the humans--the tanks, being impressive in their detail and how imposing the metal machines of death look. "The Tankies," is a phenomenal read for fans of Ennis, war comics, or those who simply want an intense tale of battle that is blunt and honest about the brutality of war. Get yourself a copy at Dead Reckoning's website or all finer bookstores!