Stealing is Almost Always Wrong, but When it's a Confederate Monument You Threaten to Turn Into a Toilet that's Just Funny 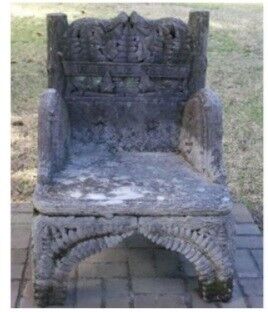 Excuse my extremely long post title, but I wanted to get my point across. My point being, it was pretty funny some pranksters stole a Confederate monument from the racist organization, The United Daughters of the Confederacy, and because it was a stone chair owned by Jefferson Davis they had the clever idea to threaten to make a hole in it and use it as a toilet. For those of you still unsure what I'm getting at, they were going to poop through it. This is tacky, childish, and just freaking hilarious. The organization in question was, "White Lies Matter," and they said they'd do this if the UDC didn't display a banner outside their headquarters with a quote by Assata Shakur. That quote? "“The rulers of this country have always considered their property more important than our lives."

The Confederacy lost the Civil War, but the way some people carry on about that centuries-ago saga in American history you'd think Jefferson Davis' traitorous, "Nation," was still alive and well. I don't think we should outright hide or get rid of Confederate monuments, but we shouldn't celebrate them either. Put them in museums, give them context, and then maybe you won't have to deal with people threatening to turn them into a toilet. This chair didn't suffer that fate as the police tracked down the chair after being given coordinates and finding it unharmed--some of the prank-loving thieves were found too. The chair has been returned unharmed to the UDC. I'm not sure what the lesson is here beyond how we shouldn't honor the traitorous Confederacy, but that was a lesson everyone should've known before a chair was stolen and threatened with being used for a dump session.