Isn't Harley Quinn Already Beyond Being a Sidekick? 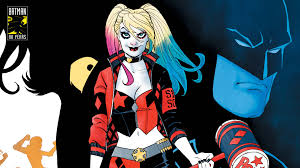 Rumors abound that Harley Quinn will become Batman's new sidekick in the #91 issue of, "Batman." In a way wasn't she already kind of beyond being a sidekick, though? She was the Joker's main accomplice for years before in a variety of comic-continuities (including the, "Main," DC one) realizing how unhealthy a relationship that was and striking-out to be a bit of an anti-hero. Actually reducing her back-down to being a sidekick seems reductive. Also, the fact it is for Batman of all people (the main foe of the Joker) just seems to be digging-up that unhealthy mess of a life she had with the Joker.

This all may be a feint as we slowly approach the 100th issue of the current Batman series and await whatever new changes will accompany it. Still, the idea of Harley being Batman's sidekick just seems to diminish her as being her own character/person/etc. You know, the whole main thing DC has been doing with her for a few years now!
Posted by David Charles Bitterbaum at 3:09 PM