Again, We Need To Talk About Drake and the Latest Red Flag 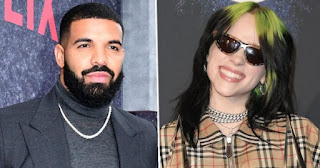 Back in January of this year (I know, it seems forever ago), I wrote about how while I enjoy the music of Drake certain problematic things were coming to light about him. Basically, I observed he seemed to have a tendency to be very close with underage girls-which can be innocent assuming he's being a mentor or something harmless--and also had behaved in a manner that indicated he was sexually attracted to said underage girls, with a history of, "Grooming," them while underage and waiting until they were just barely legal to make any kind of sexual relationship public. It happens with girls who are both famous and non-famous. This is totally legal, but pretty skeevy. I've argued we need to discuss this or it will just continue. Guess what recently came to light? Yep, new stuff.

Apparently, 33-year-old Drake has for a period of time been texting and chatting with currently-17 Billie Eilish. We see a trend of him getting close with an underage girl and while I'm not saying he wants to hook-up with Billie Eilish as soon as she's old enough...would that surprise anyone considering Drake's behavior? I said it at the start of the year and I'm saying it at the end, we need to talk about Drake. I'm saying this as someone who likes a lot of his music but grows increasing disconcerted by his behavior.
Posted by David Charles Bitterbaum at 11:49 PM