"Uncut Gems," May Be an Example of What Happens When Adam Sandler Actually Tries 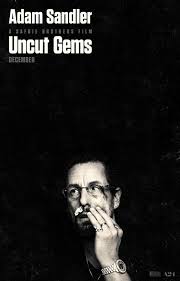 I once had the idea for a, "Film Friday," post that I never actually made because it seemed like it would be redundant in a field where many had expressed the same thought I had. My working title was something like, "The Tragedy of Adam Sandler." In the post I would have argued that Adam Sandler of all people could really act when he actually was trying, but with so many mediocre-to-Godawful movies to his name people often forgot he had legitimate skill. Just watch, "Punch Drunk Love," and how amazing Sandler is in that, or even the critically-reviled, "Men, Women, and Children," which I will admit tries way too hard in some of its stories about a bunch of characters who find their lives negatively impacted by social media, but I'll be damned if Sandler does not do a great job in that movie. He plays a husband who is cheating on his wife, realizes she is cheating too, and at the end of the movie masterfully and subtly hints they both know everything but should just let it go because they have a nice little suburban life--it's a depressing and incredible scene. I can't find it online but here are some quotes to give you an idea.

Anyhow, I never made the post as lots of people online have remarked how Sandler can actually act when he isn't just making dumb comedy movies as an excuse to take his friends and family on paid vacations, and I felt little need to join the chorus. Even if I didn't make the post it was still something I often thought, how that if we just got another movie where Sandler was actually trying and showing-off his ability to act it could result in something that might be really special. Well, here comes, "Uncut Gems."

"Uncut Gems," looks tonally a lot like the last movie from the directing duo Josh and Benny Safdie, "Good Times." The two brothers worked together to make a disorienting, weird, and unpredictable flick with another often underestimated actor (Robert Pattinson) and, "Uncut Gems," seems to be similar in the sense it appears to be totally bonkers. Adam Sandler is actually doing a really good job showing his acting skills in the trailer and this looks intense and wild. It follows Sandler as a jeweler named Howard Ratner who gets himself embroiled in a big bet that could lead to everything crashing-down around him or make him rich beyond belief.

This movie looks incredibly promising and if on December 13th is turns out to be as good as it looks I will not be surprised. I won't be surprised because the Safdie brothers have shown their directing skills before and Sandler has made it clear when he puts forth the effort he is a man who can act incredibly well. Here's hoping the potential success of, "Uncut Gems," also inspires Sandler to do more films that show-off his talent and less stuff like, "Jack and Jill."
Posted by David Charles Bitterbaum at 3:07 PM