I Kind of Wish I Could Play, "Marvel Ultimate Alliance 3," Without a Nintendo Switch 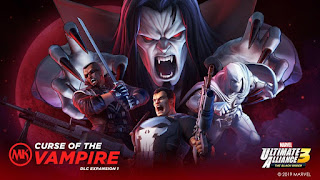 I had lots of fun playing the first two, "Marvel: Ultimate Alliance," games on my PlayStation devices. There is a 3rd entry in the series, but it is exclusive to the Nintendo Switch and I do not have or need that console as I barely have the time to utilize my PlayStation 4 for anything besides playing a DVD of, "Moana," or streaming episodes of, "Word Party," for my son. Still, I kind of wish I could play, "Marvel: Ultimate Alliance 3," especially with new downloadable content that provides Moon Knight AKA the best hero in the Marvel Universe. He was a secret-ish character in the first game you could only get on certain consoles and maybe was a bit of an afterthought then (he was not playable in the second game), but as his popularity has only grown in recent years and he has that Disney+ show on the way he's getting some more respect.

Do stores still do that thing where you can rent a video-game console for a number of days? I know I can rent video-games from VStock (a great chain of stores) and maybe they offer console rentals too. There are some Family Video stores still around too, maybe they rent consoles? I ask all of this because I just can't rationalize spending a ton of money for a Nintendo Switch if I'm only after one game. I know it has some quality titles too, but again, when will I have the time to play them? Maybe I'll bug a friend with a Nintendo Switch to let me borrow it, that's what friends are for anyway, right? Sharing stuff like laughs, memories, and their Nintendo Switch?
Posted by David Charles Bitterbaum at 6:28 PM