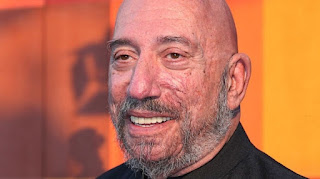 Popular character-actor and man known for generally being a great guy, Sid Haig, has sadly passed. He was often found in supporting roles in a number of films and is best-known by many younger fans for playing, "Captain Spaulding," in a number of Rob Zombie films, including, "3 From Hell," which has had a small release and I believe officially comes-out Nationwide October 5th. I always enjoyed seeing Haig on film screens or in television shows. You never knew where he was going to pop-up, but when he did he was a delight to see.

By all accounts a smart and caring man, any interview I ever watched done with him was entertaining and friends of mine who would see him at horror conventions (I have some chums who go to ones like, "Walker Stalker," religiously) would tell me he was the kindest and friendliest celebrity there--just simply excited to talk with fans and not at all rude or full of himself as anyone who has been to a con would attest some of the, "Names," at shows sometimes can be.

Haig had been open about his declining health and it was impressive he was still doing as much as he was considering he turned 80 this year. Tributes from those who knew him or loved his work have been going-up online. Sid Haig will be missed, he was a really cool guy and I was a fan of his for sure.
Posted by David Charles Bitterbaum at 6:03 PM