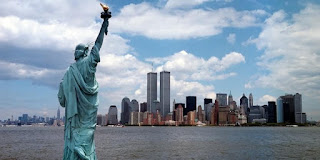 It was 9/11/2001. I was living in West Virginia at the time and in 8th grade. I was in my first class that morning after our initial Homeroom that I can't quite remember the subject of--it was English-related but had more to do with reading literature than learning grammar or such. The class had just ended and someone said how on the news they were saying one of the World Trade Center towers had been hit by a plane, a gas leak had gone off inside, or some other freak accident, people were not sure. Not too much later in my Algebra class we were told that the 2nd World Trade Center tower had been struck by a plane, and clearly America was under attack. The day all that happened felt like simply too much to take in and I was unsure how to respond. I just felt numb and confused. Then the Pentagon was hit and one other plane crashed Pennsylvania, the passengers had fought-back against the terrorists aboard. It was overwhelming.

The next day is when it really hit me, as all the images of sheer terror played-out on the television screens, collecting what had been recorded of towers falling, people running and screaming, the death-total rising...it made me and pretty much everyone else in my school cry as basically every class had the news on with us watching instead of doing our classes. Eventually the Principal had everyone just shut the televisions off in our classrooms because it was just bringing everyone undue stress and misery, but whether we had our T.V. screens going or were browsing the still-quite-basic-compared-to-today internet, something had changed for the many of us who had never lived in an America which had suffered an attack from a foreign entity on our home soil--the last time that had happened was Pearl Harbor decades ago.

Some years later I would move to Upstate New York, some hours from the city, and meet people who had lost loved ones on 9/11. My heart would ache for them then, and it still does. It was an awful day and thinking back to it 18 years later it is weird how some parts of it feel incredibly distant and other memories of that day feel immediate. Many politicians have used 9/11 for political gain while not actually caring about those affected, and countless civilians (famous like Jon Stewart and non-famous alike) have worked tirelessly to care for those first responders who now years later suffer health ailments from exposure to all kinds of chemicals, dust, and debris in the wreckage of the Towers and Pentagon.

9/11 has at times been reduced to more of a talking-point and some people like our so-called President Donald Trump would rather make the occasion all about them than the thousands of people who died or lost loved ones. Trump make everything about him however, and it would be hoping for too much to think he'd realize a day like 9/11 is about a lot more than one person (even a huge narcissist like him). Some people will never learn. There are still those who try to make all kinds of conspiracy theories sound true about that day, ignoring the simple and depressing truth that there was no master plan, it was just a huge intelligence failure on a massive scale that illustrated how vulnerable our Nation could be if someone really wanted to hurt it, but again, some people will never learn.

Now there are people who will be old enough to vote this year who only know of 9/11 from their history books or watching old footage, that is how much time has passed. I won't claim there was some lesson to learn or try to make foolish silver-lining claims about how it, "Brought us together," or other platitudes, because it shouldn't take a terrorist attack to make a Nation feel unified. It was a tragedy and the best thing we can do is honor those we lost and try to prevent something similar from happening again. The most darkly ironic thing is that now, 18 years later, our Country may be at its most divided since the 1960's and we are facing an epidemic of homegrown terrorists committing mass-shootings at an alarming rate.

It isn't Al-Qaeda we most need to fear now, it is our own hatred towards whoever we think is, "The other." 9/11/2001 was 18 years ago, but humankind's ability to hate one another is unending, be it foreign powers flying planes into our buildings or our own citizens shooting-up public places. I have no solution, the only thing I can do is hope that eventually love can win-out over hate, because as Martin Luther King Jr. put it, "I have decided to stick with love. Hate is too great a burden to bear." I hope eventually the burden of hate can be cast-off by more of us, because it seems all-encompassing in our Country right now. I can only dream and do the best I can to spread more love than hate.
Posted by David Charles Bitterbaum at 11:19 PM