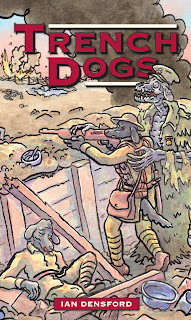 "Trench Dogs," is an original graphic novel that came out last year from newer publisher, Dead Reckoning. Dead Reckoning itself is owned by the Naval Institute Press, which is, "The publishing arm of the U.S. Naval Institute, an independent, non-partisan, non-profit, professional military membership association. Through Dead Reckoning, the Naval Institute seeks to broaden the community of those who understand the history, dedication, and experiences of all who serve." Basically, it  has the goal of publishing comics that explore military and naval history through both nonfiction and fiction means. As I am a history nerd this appeals to me.

It is interesting when a nonprofit enters into comic-book making, as it can produce works that don't have to sell a ton of copies or be super-commercial. The announcement of a different new publisher the other week that is non-profit, Fieldmouse Press, shows it is a growing group of entities who want to make comics published by their organizations. Anyways, the reason, "Trench Dogs," caught my attention when I heard about it coming-out from Dead Reckoning is that it happens to focus on World War One, a war often give a lot less attention. Also, "Trench Dogs," does the clever thing sometimes seen in other comics about war (such as the seminal, "Maus,") where it turns the people fighting the the wars into different animals depending on their Nationalities. 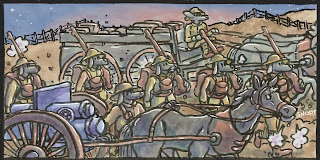 "Trench Dogs," was created by Ian Densford and he does a stellar job mixing the anthropomorphic soldiers and civilians with scenes of both peaceful everyday life and a war that was brutal. If this comic had the soldiers as humans it would maybe be too grotesque for many readers to handle, but thanks to thanks to the slight cartoon-element it allows people to witness how horrific war back then was (and still continues to be) in a manner that informs without shutting-down the reader. "Trench Dogs," is presented with very little speech from any characters or narrative captions, but Dendsford and the Dead Reckoning website helpfully provide a detailed study guide that goes in-depth about much that is in the book and provides further explanation about the historical elements of everything Densford draws in the comic.

"Trench Dogs," is a fascinating read that touches-upon many aspects of World War I and is a good way for those less knowledgeable about the first, "War to end all wars," to learn a bit about it in a visual manner. Ian Densford is a fantastic illustrator who portrays how ugly and terrible war is with some of the edge that might turn-off more sensitive readers a bit filed-down thanks to the anthropomorphic art-style. It is quite a good read and I recommend it to anyone who is a history buff or loves comics that are a bit more out-there than the norm.
5 out of 5 stars.
Posted by David Charles Bitterbaum at 11:31 PM