Last Monday morning a man named David Karpf tweeted a joke. He saw there was an article about how the, "New York Times," offices were suffering from a bedbug infestation and it was proving difficult to get the bedbugs removed because they are notoriously good at burrowing-in somewhere and a huge nuisance. David Karpf tweeted, "The bedbugs are a metaphor. The bedbugs are Bret Stephens," and went on with his day. The post was not retweeted by anyone and got all of nine, "Likes." Karpf made this light joke about Stephens because Stephens is notorious for being difficult and a pain--much like bedbugs. Stephens is someone who always goes on rants about how, "Liberal snowflakes whine about needing safe spaces," and that free-speech is important because people need to feel uncomfortable and should develop thick skin instead of getting offended all the time. Stephens is one of those guys who likes to, "Tell it like it is," in his mind, but as with many people who ramble at length about how, "People are too damn sensitive these days," he actually turns into a mess should someone call him on his own B.S. This became apparent not long after Karpf's tweet.

David Karpf not too long after his mild joke about Stephens found himself receiving a very sternly-worded email from Stephens. In it, Stephens went on about how hurt he was to be called a bedbug and told Karpf how if Karpf were to meet Stephen's wife and kids, get to know him, and all that jazz he would never dream of using such hateful language against him. Bret Stephens also CC'd the head of Karpf's department with the clear intent of getting Karpf in trouble...for making a joke almost nobody saw about Bret Stephen being a bedbug. Karpf tweeted about what Stephens had done, and then a tweet that had garnered all of nine likes and no retweets began to really take off.
From this point Stephens went on to attempt to defend himself during the week by talking about how he wasn't trying to get Karpf in trouble (yes he was) and was by no means a hypocrite for all his talk about free-speech and then being upset some random guy called him a bedbug (yes, he is). Things only got weirder when on Friday, August 30th, before everyone got to go home for a nice Labor Day weekend Bret Stephens turned-in an editorial at the NYT. Stephens' editorial was about how dangerous language is as a tool and that Nazis used it to dehumanize others. Yes, Stephens literally went and compared being called a bedbug online to the Holocaust. "What the Hell?" is the response from me and many others.

When you write your thoughts online people may take issue with it. I have been called all kinds of names by people who disagree with me and I know as a White Man I am getting barely a hint of what writers who are people-of-color, women, and/or LGBTQ face. I have heard first hand from female journalist friends who often they are threatened with rape by people they have never met enraged at an article they wrote. I hear about LGBTQ people being harassed by alt-right morons who doxx them with threats towards their family and friends. Bret Stephens was called a bed bug as a joke by a professor, and he absolutely flew off the handle about it. I guess the importance of free speech applies to his right to insult others, but should never be applicable to somebody telling a joke at his expense. 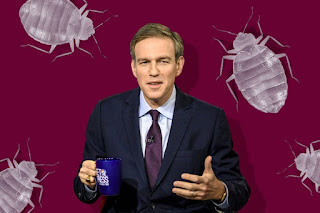 I spoke with David Karpf via Twitter last night as he said his DM's were open to any reporters curious about all this craziness. I wrote him and asked if this was really as weird as it all sounded and he confirmed that it was. Stephens must have found the tweet through an assistant who looks for any references online for Stephens or via having his Twitter set-up with a keyword alert for his name. In my opinion that sounds absurdly narcissistic, but how else could he have found Karpf's tweet? As Karpf told me, Stephen's must have put in some effort to find the tweet, managed to get offended at it, and then took the time to track Karpf down and figure out a way to contact him as well as the people above Karpf at the University. Stephens did all this to--in his mind, "Put me in my rightful place," as Karpf told me. This entire debacle is one I told Karpf I felt bad he was dragged into and I said I hoped things got less weird for him soon.

To review, a tweet almost no-one would have seen is now trending massively and Bret Stephens is being given funny hashtags like, "Bretbug," by Twitter users cracking-up about how stupid this all has been--with the blame for the idiocy falling squarely upon Bret Stephens. Bret Stephens earned his bad week, and hopefully once he returns to work from Labor Day (its amazing if the NYT wants to employ him still after all this) he'll realize how all the blame for this getting so much traction falls right upon him. Then again, he will probably just blame everyone else, something Conservatives tend to excel at.
Posted by David Charles Bitterbaum at 3:45 PM