Another Awesome Toyman Show Has Concluded!

Today, August 5th, I enjoyed yet another Toyman Show put on by the awesome Chris, "Toyman," McQuillen. In honor of how it is back-to-school season in our region (most schools start back-up next week) there were free backpacks full of school supplies for the first 50 kids in attendance at the show with a paid entry (kids 16 and under get in free, so as long as their parent was present and got a ticket the kid got in for free as usual and got a free backpack full of useful stuff)! It wasn't only the kids who were appreciated though, there were door prizes as always including passes to upcoming shows as well as other goodies.

For this show a number of stellar guests were present, such as comic-artist Steve Geiger--who has worked for a wide range of publishers from big names like Marvel to smaller companies, and whom I have met at other cons and can attest is super-nice. Guy Gilchrist of Muppets, Nancy, and Looney Toons fame was there as well, plus D.A. Firzell (whose dark art style is scary and impressive), and Scott Schwartz from, "A Christmas Story," was present too! I know what you're wondering though--did I get any cool stuff this time? Well you know I did! 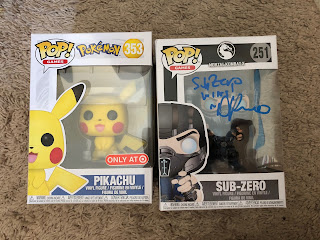 As the above picture shows, I was able to acquire a Pikachu Funko Pop as well as a Pop of Sub-Zero signed by the actor who portrayed him for the original, "Mortal Kombat," video-games, Daniel Pesina. I got both of these from the awesome toy retailer who had a vendor-booth at the show, Toys of Our Youth. I was able to trade them a variety of things I had for these rad Pops and they are always the first vendor I speak with anytime I attend a Toyman show thanks to their amazing selection and very nice staff.

After making some trades with Toys of Our Youth I enjoyed walking about the rest of the show-floor, where I as always spotted an amazing array of stuff for sale. Whether someone is after action figures, Legos, toy cars, comic-books, old T.V. Guides, video-games, DVDs, vintage horror posters, or anything else new or old the diverse range of vendors with a wide range of rad items is what keeps me coming back to Toyman--there is always something new and cool to look at and consider buying! 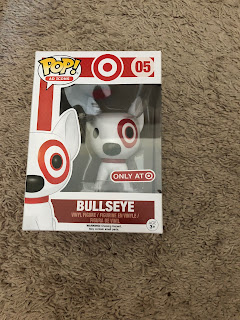 I usually seem to meet someone new and cool at each show too. For example, I made the acquaintance of  a Funko Pop-vendor named Tugboat Tony (and his delightful wife) and was excited to provide a mixture of trade and cash for the super-cool Bullseye Funko Pop pictured above. I've acquired a Bullseye Pop sometimes before, but never one in a condition as great as the one this was in, making it a stellar addition to my small-but-mighty collection of Ad Icon Funko Pops. The couple was really nice and are selling a variety of their collection currently so I'd encourage people to message Tony if you're after a particular Pop as he and his wife had quite the number of Pops for sale at the show!

All-in-all I had yet another amazing time at the latest Toyman show--there is a reason I keep going back. Whether I'm meeting cool new folk like Tugboat Tony, chatting with the awesome folk at Toys of Our Youth, interacting with the countless other vendors, or introducing myself to the cool guests, Toyman always is jam-packed with things to do and stuff to buy. Oh, and it has free coffee, which is a Godsend if you're someone who likes to go to shows earlier to browse all the cool stuff but also needs coffee in the AM to be able to function. As long as the fantastic vendors keep returning, cool guests keep stopping by, and the coffee remains plentiful for the times I attend in the morning, you can bet I'll be present at the Toyman show too--so keep an eye out for me September 23rd, when the next Toyman event occurs!
Posted by David Charles Bitterbaum at 11:17 PM