I generally try to not let myself get too hyped-up for a video-game. Often we will see promotional videos, read exciting preview-articles, and otherwise be told we're getting the equivalent of a fancy buffet when the actual product turns out more like a bucket of eggs from Denny's--possible to digest, but disappointing and unappetizing. That said, the more and I see and hear about, "Cyberpunk 2077," the more excited I get, with only a handful of reservations. Since watching the 48-minute gameplay video at the top of the article I'm only more enthusiastic.

The company behind, "Cyberpunk 2077," is CD Projekt Red, best known for their series of, "The Witcher," games. I played some of the first one on PC and a good deal of, "The Witcher III," on my Playstation 4, and found especially the third game to be masterfully designed, but not really for me. It's set in a big sprawling fantasy world which is good and all, but I've just gotten more and more tired of fantasy over the years and would rather be in a sci-fi location than one full of dragons and magic. Hence, hearing a team with the pedigree that CD Projekt Red has was working on this game had me optimistic. Based on the tabletop game, "Cyberpunk 2020," this was actually announced some years ago, and then we heard nothing. Years went by and CD Projekt Red insisted they were working on the game, but it was mostly radio silence. Then at the most recent E3 a bunch of gameplay footage was showed to the press of, "Cyberpunk 2077." Now, a bit later that footage has been released online with some extra narration from a designer carefully emphasizing this is all a work in progress and a lot could change--basically, trying to manage expectations. Fuck it though, I'm all-in on the hype-train at this point. 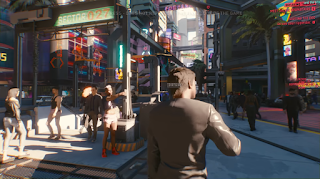 The idea of a futuristic open-world where your character can tweak their body a variety of ways and solve quests as peacefully or violently as needed just gets me pumped. I've loved the, "Deus Ex," games but have found them at times a bit dry or lacking in feeling, "Alive." This though, it just bleeds character. Watching your character, "V," wander through Night City is amazing, witnessing this world full of little details that seems full of life and otherwise bustling. It is amazing, gorgeous, and then we see the driving. The one thing that didn't really make me go, "Wow," was when V got behind the wheel of a car. Suddenly everything seemed a lot less busy and more static, this universe dripping with character looked like a a mess of roads and highways designed to get you to the more exciting locales. It was meh. That is okay though, because as soon as V stepped out of the car everything was cool again. We witnessed complex conversations trees, cool little abilities you can install in your character, and otherwise I was impressed.

I know the game is still deep in development and CD Projekt Red is notorious for saying something will come out, "Once it's done," as opposed to rushing out a mediocre game. That said, even if we have to wait until 2020 or so I'm very, very eager to play this game and if it is merely a smidgen as good as it looks and sounds like it will be, we're gonna have something magical on our hands. I know I should temper my expectations, but CD Projekt Red has the skill and dedication that makes me believe this is going to be one awesome open-world RPG...just maybe they can tweak the driving-elements a bit more, you know?
Posted by David Charles Bitterbaum at 9:58 AM