Mercari is a Terrible App for Sellers 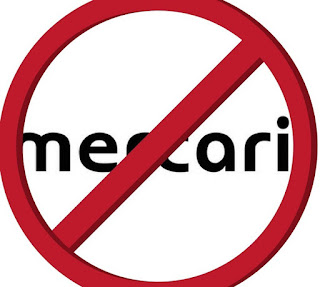 A chunk of time ago I made a post about how I enjoyed using Mercari to purchase items. Since that time I started selling items on Mercari sometimes too, listing comic-books, Funko Pops, clothes, etc. After a number of bad experiences as a seller and the worst one just occurring, I can say I personally feel Mercari is a terrible app for anyone wanting to sell anything. Curious how I came to that conclusion? I shall break it down...

Now, people will sometimes complain about eBay and how it, "Always sides with the buyer," but I personally have never had a bad experience with eBay customer service when I have needed to reach out to them via phone or email. Meanwhile, with Mercari I've had it happen to me and read about it happening to other people where a buyer will complain something was damaged or not how they wanted, and be allowed to return it with no investigation. They don't have to supply pictures of damage, or that the item wasn't packed well, etc. Now then, this time I had a Pop I sent someone and they said it was damaged, so they of course were allowed to immediately return it. I noticed they had negative feedback and probably were pulling a scam. Mercari didn't care. I requested I still at least get credit to buy stuff if not my full payment--Mercari said no. I repeated how this was most likely a scam of them replacing my Pop with one that was already damaged and it fell of deaf ears. I then sent the last message below: 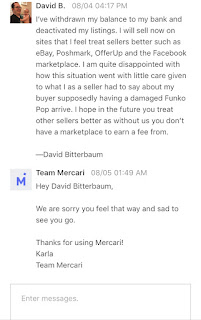 As you can see, I pointed out how I was done with the app and felt other ones were more deserving of my selling on them--after all, without sellers these apps lack anyone to draw fees from. The response was one of indifference and basically the same snarky tone I encountered my entire time I was working with customer service on this issue. I'd had problems with Mercari before--as I've said--but this was just atrocious and beyond anything I'd ever had occur with any other selling app or website. Oh, and the Pop was returned and I'm pretty sure they did a scammy swap-out as I suspected.

It is needless to say I don't plan to sell on or buy from Mercari ever again in the future. I would much rather buy and sell at the many other options that exist such as eBay, Poshmark, OfferUp, Facebook's Marketplace, and other sites/apps I'm surely forgetting. If Mercari wants to have such blatant disregard for the people who make it turn a profit, they don't need me, and I surely can go without them.
Posted by David Charles Bitterbaum at 12:55 PM