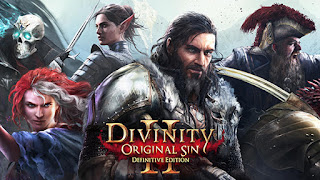 I mentioned in a previous post about assorted video-gaming news that the upcoming release of the updated/"Definitive Edition," of the popular game, "Divinity: Original Sin 2," had a unique promotional feature. The game itself isn't for sale in its new, "Definitive," form until August 31st for PC or Xbox One, but Playstation 4 owners who buy the game now digitally can play through the whole first act, a solid chunk of the game for sure that is advertised as being about, "20 hours worth of content." Seeing as how I have a Playstation 4, wanted to play this game, and have a PC woefully underpowered for it, I figured I might as well give the PS4 version a shot as I was saving-up to buy it anyways as either a physical disc or a digital copy. Having now played a total of 10 or so hours as two different characters I can offer some early impressions.

Now then, this is a game that can take hours upon hours to accomplish, and I have not even completed the first of the three acts that those who bought the game now can already dive into. Therefore, my opinions are by no means a big, comprehensive review. That said, I have enjoyed enough of a chunk of the game to know I really like it. I first started out as one of the premade, "Origin," characters who have their own special quests (and whatever ones you don't play as you can meet in the game). She was an elf with a , "I need revenge," back-story and I got the hang of the controls while I was her, but found the whole, "Angry and quiet badass," routine of the character a little meh. Following two hours as her I decided to play the surreal undead character, Fane, and have not regretted re-rolling as someone else in the slightest. 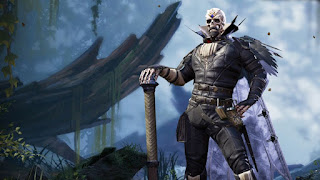 Fane has an issue where his appearance is that of a skeleton. People do not take kindly to undead so he has to either disguise himself in lots of clothes and a hood or literally take/rip-off the faces of dead enemy races to appear as if he is a human, dwarf, elf, or lizard-creature. Besides being undead he is perfectly friendly (if you want to play him that way) and a scholar. The game starts with he (or any character you play as) stuck on a ship heading to a prison colony for characters with magic powers that threaten reality (there are some plot elements that relate to the first game about all this it seems). Once the ship is wrecked by some otherworldly creatures ("Voidwoken,") you end up on the island and want to escape. From there the game leaves you to wander around, take side-quests, and figure out a way to leave the island through a multitude of options (once you leave the island more areas open-up too). The whole point of the game is to be very open-ended and I greatly enjoyed exploring around and chatting with the assorted characters on the island. Then combat would start.

Fighting in, "Divnity: Original Sin 2," is turn-based and that is good because so many different things can be happening at once you need to go slow and carefully plot your actions. When a fight breaks out the mixture of spells, environmental hazards, armors, weaponry, and the like can make the smallest quarrel feel like an extended slog. You have to flip-through various menus as you try to anticipate and react to a wide array of enemy actions and while there is a fun tactical element to fighting, so many dynamics are happening at once it can be bewildering--especially when you think you've got it all figured out only for everything to suddenly go wrong as fire erupts everywhere, your enemy uses a potion to heal themselves, and your entire party ends-up burnt to a crisp (seriously, fire-related spells and tools are used a lot in this game). I would rather just be chatting with all the cool characters and walking around the beautiful landscapes, but, "DOS2," just loves to throw you into trouble and laughs as you struggle to figure out all the elements of the fight to avoid a gruesome end.
Considering just how much there is to, "Divinity: Original Sin 2," and this, "Definitive Edition," of the game I have barely scratched the service. There are other races to play as, other classes to master, a whole bunch of environments I have yet to visit; honeslty, I'm still not exactly sure if I've been choosing the right skills for my characters every time they level-up or if I'm dooming myself to speedy defeat as the fights get tougher. From what I have played however I have been having a really fun time, and combat-confusion aside love basically every aspect of the game from the clever writing to how hilarious you can be as a snarky undead gent. I'm excited to continue playing through the rest of this first act and once the full game unlocks on August 31st play the rest of this massive game as well!
Posted by David Charles Bitterbaum at 10:47 PM