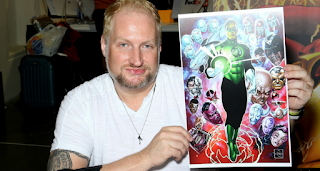 I met Ethan Van Sciver at one of the Wizard World conventions some years ago. He seemed like a pleasant enough guy. We chatted about comics and his art-style, and I asked him about his politics because I was aware he was outspoken in being what he considered, "Conservative," in a field he thought had many Liberals (comic-books). I friended him on Facebook and would see him occasionally post stuff with his artwork, nothing too wild. Then as time went on I noticed he was getting more and more out there. He became a vocal as someone who wasn't conservative but just in fact hateful. He is part of the moronic, "Comicsgate," that exists to harass women, minorities, and etc. in comic-art. He left DC, but was possibly told he had to leave or get fired, depending on whom you ask. I kept myself as Facebook friends with Van Sciver out of a morbid curiosity of sorts, watching as his, "Cyberfrog," crowdfunding project made a lot of money (which is good for him) but had lots of comments from people funding him that immensely disturbed me...and which he welcomed.

There are Conservative comic-makers out there, just look at Chuck Dixon who has discussed being a Republican but also seems like a reasonable and pleasant human being. Van Sciver just has gotten more and more out there, with it getting to the point he took offense the widow of Darwyn Cooke, Marsha Cooke, discussed how Darwyn would hate Comicsgate and Van Sciver sicced his alt-right fan-base on her.  That's right, Ethan got into it with Cooke's widow about who knew the deceased creator better and Van Sciver's devoted fans harassed her. I'm done with Ethan Van Sciver and I'm sorry Ethan, but we can't be friends anymore (I unfriended him today). I won't be friends with someone who treats others so terribly, and if my openly discussing this gets his fans all mad at me and I get hate-tweets or such that is a price I'm willing to pay for having principles.
Posted by David Charles Bitterbaum at 10:51 PM