A Retrospective on "The Jerry Springer Show," and its Impact on American Culture 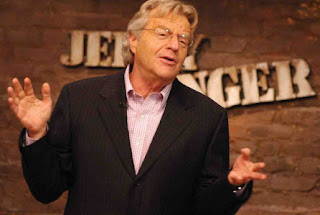 It is over. "The Jerry Springer Show," had existed in some form since 1991, although it started out like a, "Regular," talk show before when ratings were bad then moprhing into the pop-culture phenomenon it was in the late 1990's. Eventually it became a standard daytime talk-show in people's minds as what was once wild and crazy seemed less shocking now that we have the internet to look-up all of kinky desires--lasting all the way up to June 2018. Apparently it was cancelled, with episodes staying in reruns but no more ordered by the CW. That's right, "Springer," was cancelled and basically nobody noticed. I only realized this when I read an article that came out recently from the AV Club written by a woman who worked there once. I then did a Google search and sure enough, the show is done.

"The Jerry Springer," show was by no means still as huge an element of our cultural discourse as back 10 or 20 years ago when it was getting all the headlines, pop-culture references, and otherwise dominating the airwaves. The show was hated by many, considered tasteless trash with its focus on weird family drama, sexual fetishes, fights, and sometimes all three of those elements combining in odd ways. I remember when I was barely older than 10 years old in 1998 my parents forbidding me to watch it--so I of course did whenever I was able. I found, "Springer," to be a weird and fascinating show. A peek into a side of America lots of people maybe didn't realize existed, or maybe wanted to pretend didn't exist. An America of weird love triangles, sexual domination, gender fluidity, and people who were so desperate to either get on television or just be listened to by someone, anyone, they were willing to go on National T.V. to air their dirty laundry about how they were cheating on their spouse with their husband/wife's twin (which was actually one of the tamer subjects the show could have).
My parents perhaps were worried 10 year-old me wouldn't understand all the adult content on the show, but I was fascinated by this then rarely-discussed by mainstream society world of weirdness. While in later decades the show did become more silly and basically just had confessions of infidelity, "surprise," reveals of transgender dating, or stripper contests, when it was at its highest point of success (so in a way, its nadir), it also spotlit things people didn't want to talk about that needed to be addressed. America's hidden little corners of Neo-Nazism and White Supremacy were covered by the program, with Jerry Springer himself almost once physically fighting a guest who made a disgusting comment about Springer's relatives who died in the Holocaust. Back before this current era where these people now sadly feel safe to emerge and spread hate, we needed a program like, "The Jerry Springer," show of all possible programs to shine a bright light on these horrible hateful groups and expose them for the morons they were.

"The Jerry Springer Show," was by no means a production with lofty-goals or a high-minded concept once it started leaning into being trashy. It was a program looking for scandal and outrage, which at the height of its popularity it had a ton of for sure. Still, in a weird way it helped put a microscope on elements of society that at the time maybe weren't getting much attention or discussion (remember, the internet wasn't as huge in the 1990's so watching a show about transgender dating or BDSM was the opposite of easy), but thanks to being broadcast on T.V. helped spread some awareness of how there are people out there with kinks, startling secrets, and America has a lot of interesting folk hidden away who could very well be your neighbor too.
Whether your loved it or hated it, "The Jerry Springer Show," was a big part of American culture for almost three decades. That's an astonishing accomplishment for any T.V. program. Springer himself will be fine, over the years appearing less and less interested in hosting the show so much as using the fame from it to pursue other interests, having always seemed to enjoy various guest-hosting duties for other programs and events more, or engaging in discussing politics whenever able (he was after all a campaign-adviser for Robert Kennedy and politician himself before he became a journalist and eventual show-host). He always seemed like he had an air of detachment from his show, with it giving him a weird charm and contributing to his ability to step-aside when needed so the guests could express themselves and get the majority of the attention--which was of course the point of the program.

"The Jerry Springer Show," will live-on in reruns for some time, but nothing new is going to be recorded and eventually it will quit being broadcast. When that occurs all we will have are our memories and the old, "Too Hot for T.V.," VHS tapes from back in the day. I for one will miss the show, in all its dysfunctional and disturbing glory.