Flashback Friday: The Series' Finale of, "Dinosaurs," Was Pretty Dark 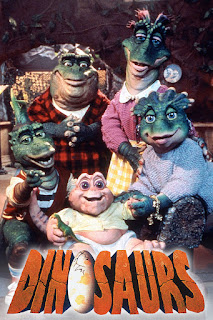 When I was little I loved the Disney show, "Dinosaurs." It was hilarious with the baby beating his dad, Earl, with a frying pan and I loved dinos, so it appealed to me. As I got older I noticed that there was lots of interesting messages, topics, etc. addressed by the program. Also, I realized how freaking dark the series' finale was. Basically, due to corporate greed the dinosaurs doom themselves to extinction by destroying the environment (it is uncomfortable how many ominous parallels can be drawn from that). Yeah, bit of a downer, eh? Reading this article about how that funny-in-a-really-dark-way finale came about was quite...I guess, "Fun," isn't the right word as it is about the show killing it`s whole cast, but you know what I mean.

In this era where series' finales often seem to disappoint fans by not doing enough to seem, "Final," the idea that, "Dinosaurs," went for broke and subtly made it clear everybody was doomed is impressive. After all, when you destroy the Earth that kind of eliminates the chance of any pointless spin-offs ("Friends," never should have followed-up with, "Joey,"). In this era where people online critique the smallest aspects of a show I wonder what something as dramatic as the finale of, "Dinosaurs," would get in response. Anger? Satisfaction? Whatever the case, everyone would agree it was better than how they ended, "Dexter."
Posted by David Charles Bitterbaum at 9:52 AM