"Black Hops," From Antarctic Press is Great and Silly Fun 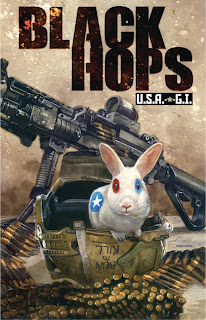 Antarctic Press publishes an interesting variety of comics, from one of the longest-running comics currently in existence, "Gold Digger," to assorted parody books, and other fun reads. They just recently did a two-issue mini-series I couldn't help but find myself intrigued by, "Black Hops: USA-*-G.I." which is a mouthful of  a title so I'll just call it, "Black Hops." It starts an unnamed rabbit (his official name is always redacted in files) who works for the United States Government in various combat situations. You read that right, a cute bunny who also is a well-trained killing machine. It sounds silly as Hell, and writer Mark Pellegrini has just the right mixture of deadpan presentation with tongue-in-cheek disbelief from anyone who sees the rabbit that it works.

Essentially, the rabbit survived the nuclear bomb that America dropped on Japan in 1945 and was recovered by a U.S. trooper who noticed it had changed from radiation exposure to be super-intelligent, capable of camouflaging itself, and that it did not seem to age at a regular speed. This resulted in it working for America in various wars and eventually retiring to a farm. The rabbit is pulled back into working for the U.S. though when a North Korean missile test with faulty equipment puts Hawaii at risk. Over two issues the rabbit infiltrates North Korea, fights other enhanced creatures, and thankfully saves us all--with the comic cleverly claiming that missile-scare in Hawaii some months ago was actually related to this, and the rabbit successfully taking-down the silo resulted in recent talks by North Korea of nuclear-demilitarization, so a clever way of tying current-events into a fictional yarn. 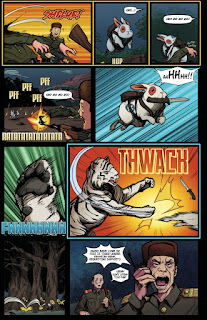 Timonthy Lim and Brian Denham provide the interior artwork, which is solid if not amazing. I never found myself especially impressed with any of the drawings on the page, but also could clearly follow the action as our unnamed soldier-rabbit fought his way through opposing forces. Also, at just two issues the comic never wears-out its welcome, realizing the concept of a rabbit who also is a soldier only has so much traction before the joke is exhausted. I found myself quite entertained and would give this two-issue mini-series a glowing 4 out of 5 stars. You can ask your comic-shop to order you a copy or buy it from the Antarctic Press website as well should you like to read it!
Posted by David Charles Bitterbaum at 11:04 PM