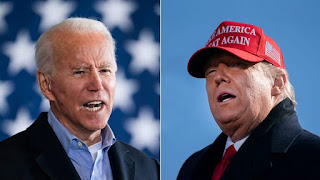 Many were hoping for Biden to absolutely crush Trump at the polls and have it be clear there was no way to contest the Biden-Harris ticket as an unequivocal winner on election night or shortly after. We also knew that probably wouldn't happen. What was likely to happen has occurred. The election is close (even though how you could still support Donald Trump is a mystery to me) and now we have to wait for the, "Battleground," states to get their ballots counted. Trump already wants to declare he's the winner because the man is a jackass, but this is going to take some time. There will most likely be lawsuits and Trump could very well try to use the Supreme Court to steal the election. Bernie Sanders warned us along with many analysts and reporters, but we wanted to hope this would be easy. It's 2020, ain't nothing this year easy. Now we just need to make sure every single eligible ballot is counted and hope the candidate we support is the winner.

We also could, you know, get rid of the horribly outdated and flawed electoral college and just have the election rely on the popular vote, but that's a whole different post for another day.