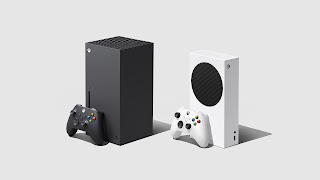 Remember how big a deal a new console used to be? Amazing leaps forward in graphical abilities, the addition of wild new features, fans frothing at the mouth to play that launch-day killer game. It seems those times have passed, but it's okay, we now just have reliable updates that are pleasant but lack a certain oomph. For an example of this, see reviews of the Xbox Series X which observe it is so much like its predecessor console, but faster. Some reviews outright say this new generation is boring, but that's okay because the addition of games-on-demand through streaming services is snazzy and makes it okay we lack a day one game to blow our socks off too. Other reviews observe the Xbox Series X may be the best new console ever (at least until people can compare it to the also-imminent PlayStation 5), but ask if that's really enough at this point with so little to get excited about?

Oh, and there is the Xbox Series S, which is like the discounted version of the new Xbox, and its okay too, but if you' can shell out the extra hundreds, you want the bigger and more powerful console. It's kind of a cute little afterthought for many reviewers--acceptable but more of an opener to the headlining Xbox Series X. Is it much of a headliner, though? There are some nice new features, the game pass is cool, everything is more powerful, but besides the die-hard fans there is a lack of anything to light a fire under our bottoms to make us want to go grab an Xbox Series X (or S) when they launch shortly.

A lot of these statements will most likely be easy to apply to the PS5 as well. Most of the new games are going to be on older generations of consoles too--just with less snazzy graphics and slightly longer loading times. It is going to take a year or two for people to really start making the most of these consoles and for the big-deal games to come out which are exclusive to these new devices. The Xbox Series X and S are perfectly fine and the PS5 most likely will be too. I just wonder if being, "Fine," will make everyone feel okay waiting a year or so to bother getting any of these. Time will tell.