Television Tuesday: The Bachelor is Back and as Weird as Ever 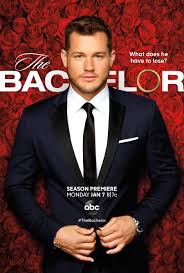 I watched the first two hours of the season premiere of, "The Bachelor," last night before I was too tired/annoyed and had to tap-out and finish it today. I say this to get one big thing out of the way: Colton Underwood is very dull and he is a terrible choice to be the Bachelor this season. Yes, he is handsome, plays/played football, and everyone loves the countless jokes they can make about him being a virgin--but virginity is not a personality trait and acting like that makes Colton the least bit interesting just because he has made the personal choice to abstain from sex is paradoxically almost shaming him for his choice as opposed to supporting it. Also, about 1.5 hours of the premiere--e.g. half--was spent like some surreal, "New Years Eve," special show with host Chris Harrison and a bunch of, "Viewing parties," talking about how excited they were to watch the show...that we were all are watching.

This, "Viewing parties," aspect was a huge drag and resulted in us not seeing a single woman arrive in a limo until we were an hour into the damn program. People don't watch this show to observe random strangers at parties propose (we got multiple occurrences of those) or to check in with past show-participants Chris AKA, "Goose," and his lady-friend Krystal (who were sitting in a hot-tub in the middle of a parking lot soliciting strangers to join them, so a normal Monday night for those two). No, we watch, "The Bachelor," to witness a bunch of thirsty women all nearly come to blows with each other in the hopes they'll be able to state, "I got Colton's wiener in me!" The actual show itself was fine but Colton is still (as I keep saying) boring as Hell. Thank God some of the woman are interesting and/or delightfully insane.
I will say that Cassie seems like a genuinely nice and decent human being. She's a speech pathologist, brought Colton adorable fake butterflies because she had, "Butterflies," and is just so cute. I liked the lady who was in a sloth outfit for quite a long time and really committed to the bit (Alex is her real name, but I'm forever calling her sloth-girl and sad she went home the first night). We also got some funny gals--Onyeka wearing a snorkle and declaring how Cotlon appeared to be, "Drowning in some bitches," was a highlight. Besides that, we had the usual borderline-dangerously-unstable women. There was Bri with the fake Australian accent, Catherine who randomly handed Colton her dog and proceeded to repeatedly interrupt other women's time with Cotlon due to being mad people kept stealing him from her (which is how the damn show works), and sweet, delirious Demi, who has a mom in prison for embezzlement, describes her vagina as a confetti cake, and loudly screams she is, "Hot-dogging for Colton." Oh, and Erika handed him a bag of nuts and basically outright (and somewhat aggressively asked), "Why ain't you fucking?" if in slightly tamer words.

Toward the end of the show Chris Harrison said how, "We've never done this before," and I honestly hope they never do it again. I did not need half of the show spent at pointless viewing parties when I could have watched these horny gals already vigorously dry-humping with our Bachelor after showing up wearing sashes that read, "Miss Underwood," as a joke that would be funny if the grammar weren't horrendously wrong (she'd become Mrs. Underwood). The actual show was good, after putting aside how Colton seems to have about three expressions--confused, sad, and vaguely aroused--because at least the women seemed primed to deliver solid doses of drama. The only viewer-party related nonsense I liked at all was the, "Surprise footage," that people had to unlock via likes on Instagram (don't ask) which was actually all about Chris Harrison over the 17 years he has hosted this show. It was sweet, but a little weird to have that randomly occur and be announced by Chris' mom. Like, is he okay or this some kind of creepy pre-in memoriam for him before later this season he ends up beaten to death with Colton's violently-engorged penis once the guy snaps after the millionth pun relating to him being a virgin?
Anyways, it is, "The Bachelor," and if we're 23 seasons into this shit you know what to expect. I have discussed in-depth this show's flaws as being extremely heteronormative, struggling at addressing race, and otherwise not exactly being a shining beacon of representing feminist ideals. It's a messy and trashy program, but occasionally something cool happens and I love to live-tweet about it with my fellow snarky-folk. I know I'm ready for a hopefully wild and fun season, and maybe in-between the countless jokes about Colton's virginity we can have some serious discussions about the idea of sexuality in relationships and how there isn't anything wrong with choosing to abstain from sex until you find the right person, just as it is perfectly fine to also be a very sexual being. Nah, that's too progressive, we're only gonna get more women handing him peaches and asking if he wants a bite of their, "Sweet Georgia peach," aren't we?
Posted by David Charles Bitterbaum at 6:03 PM