The Weather Was Cold but the Toyman Deals were Hot!

Yesterday was extremely snowy, but thankfully thanks to the hard work of snowplow trucks and things getting a bit warmer the roads were just a bit wet (not even that slick). Therefore, I was able to shovel our drive-way and make my way to today's Toyman Show. I was eager to trade some comics of my own I brought (and I had a little bit of cash) to acquire some cool reads for a good price. Sometimes when I go to the show I'm looking for Funko Pops or other toys, but today I had comics on my mind, and I had immense success finding some cool stuff! 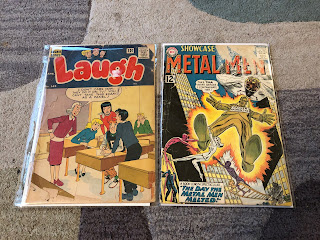 I found a really old comic featuring Archie and his friends as well as an old issue of, "DC Showcase #40," with an early appearance of the Metal Men. The comics are far from near-mint condition but that allowed me to get them for reasonable trades/prices! 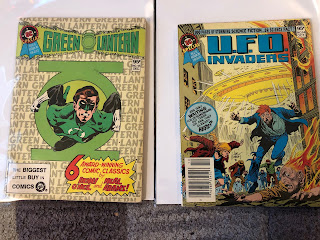 I talked with one vendor at a table named Dan, who was at the show with some wares from his store, Comic Service, located in Springfield (Illinois). I traded some comics of my own for these cool digest-sized reads about Green Lantern and UFOs. 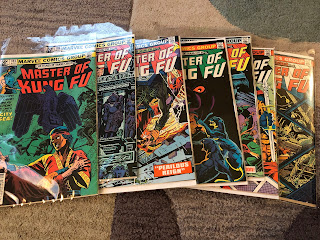 These rad issues of, "Master of Kung Fu," were on sale for just a buck each and I couldn't say no to some vintage adventures of Shang-Chi. 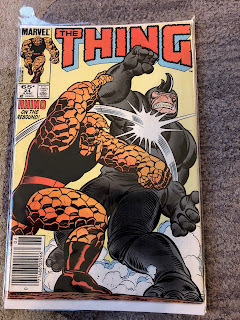 Lastly, in the upstairs section of the show I bought some assorted ashcans, underground stuff, and this really cool read featuring The Thing (of Fantastic Four-fame) fighting a Spider-Man foe I feel is underrated, the Rhino.

Today's Toyman show was (as always) a delight. This time I was after awesome comics and I succeeded at finding them. There was a wide array of toys for sale too--obviously--including everything form old action figures, to hot wheels, lego, and so much good stuff. The next show is March 10th, and I hope to be there without a doubt (regular admission starts at 9AM for $5 with 16-and-under free, early bird entry is 8AM and $12). I'll see everyone there!