"Twilight of the Bat," Comic Review 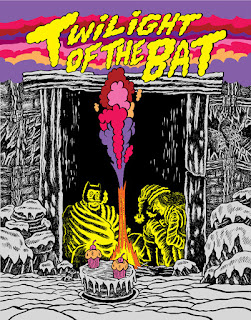 Simmons did a tale about this Bat-character before that I enjoyed in how bizarrely twisted it was as the Bat talked about his obsession in regards to fighting-crime (as a Catwoman-style character said how he'd become a bit pathetic) and came up with a disturbing concept for mutilating criminals. While when it was published as a mini-comic it was titled, "Batman," Simmons was able to include it in his utterly disturbing collection of his work, "The Furry Trap," (a book I've talked about before) by changing some elements, such as naming it, "Mark of the Bat." I heard he had another comic with the Bat that came out in late 2017, but utterly forgot about it until I saw some writing about it recently. I immediately ordered a physical copy from publisher Cold Cube Press (because even if it can now be found digitally, I like physical comics a lot). I've now read the comic and will share my thoughts. 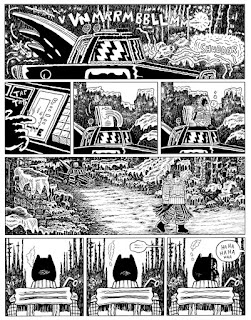 The first thing that I noticed/realized about, "Twilight of the Bat," is that while it has Josh Simmon's credited as the writer of the story, outside of the artwork on the back-cover of the comic he does not contribute any further art. Instead, Patrick Keck is the artist. While I enjoy Simmon's illustrative skills, this was not a bad thing at all as Keck's work is perfect for this story, which involves G---- City now utterly destroyed due to some kind of explosions/bombs/etc.

The place now is covered in snow and fires, with Batman for months unable to find anyone, until he spots his unnamed (within the story) laugh-loving criminal counterpart. The book never says its the Joker, but it is. Keck's artwork makes the snow and ruined city looks absolutely perfect in how ruined and destroyed it all is. Plus, as the comic proceeds and Bats finds his patience wearing thin with a completely laissez faire Joker, Keck's work perfectly expresses all kinds of blood and gross body-matter being exposed. 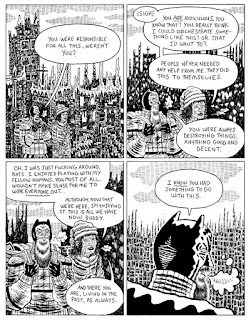 Simmon's writing always is a weird mixture of quiet subtly and over-the-top grossness. "Twilight of the Bat," has a moment where the Joker dances around at Batman has ripped-off a finger from him in rage, waving his hands about (as blood sprays around) before proceeding to take a dump on the ground--all it turns out, in the hopes of simply making the stone-faced Batman laugh. Much of the comic discusses how the Joker doesn't think he's doing things to be mean or nice, he just feels he likes a good joke, and Batman's obsession with right-and-wrong is just a hilarious thing to mess with, in his mind. It is a comic that is a mixture of fan-fiction, satire, and its own interesting take on the whole mythology of how Batman and the Joker both need and despise each other. I enjoyed reading it and would say Simmon's and Keck did a great job.
4 out of 5 stars.

"Twilight of the Bat," is available for free digitally. You can order your own copy of the comic itself at the aforementioned Cold Cube Press website. It is also contained in a collection of works by Simmons that came out in 2018, "Flayed Corpse and Other Stories," which is published by the great folk over at Fantgraphics.
Posted by David Charles Bitterbaum at 7:49 PM