Begin
I read two graphic novels that both dealt with one subject extensively, but with completely separate tones. That subject was of course the ever popular activity of sex. The completely different ways the books dealt with the topic of sex really struck me as interesting as they showed sexuality in such vastly different lights. The two books were Jess Fink's "Chester 5000 XYV" and Josh Simmon's "The Furry Trap".

Sexuality As A Pleasure 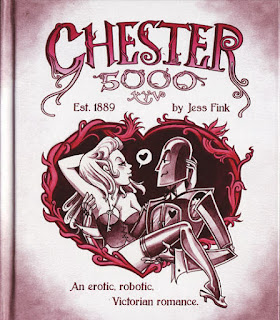 "Chester 5000 XYV" is a wordless tale which through its images is able to impart a story of love, longing, and happiness. A woman (whom the book identifies as "Priscilla" in the description even though a name is never said) has a husband (whom the website which continues the story past the book says is named "Robert") who wants her to be satisfied, but  is busy with all of his scientific inventions. To try and make everyone happy he creates a robot for her to have relations with--the titular Chester 5000 XYV. Things begin to go awry however when Priscilla and the robot fall in love. Robert becomes jealous and sells it to another woman, but Chester loves Priscilla too much to even touch the other female. After a confrontation between Robert and Chester--but then some apologies afterward--it is realized that Priscilla and Chester are meant for each other, and Robert and the lonely lady he sold the robot to are themselves in love. There is of course also a lot of sex in the book.

Seriously, in explicit detail we see Priscilla and her husband Robert, Priscilla and Chester, The  Robert and and the other woman, and there is a bit where Chester, Priscilla, and the lonely woman all are intimate with each other together. The only people who aren't intimate with each other in the book are Chester and the husband, which makes sense as if I were in a knock-down drag-out fight with someone over the woman I love I probably wouldn't want to have sex with them afterward, even if they apologized. 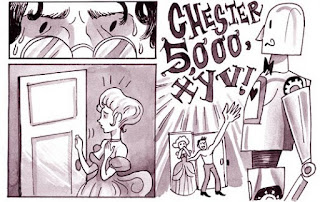 Despite the drama of Robert's jealousy and his conflict with Chester the book is very light-hearted and fun. Sex is shown as something to be excited about, enjoyed, and most importantly of all, something which should be fun! Not once in the book is sex treated as something sinful or wrong--remember, the husband isn't mad about Priscilla having sex with the robot, he is mad about them falling in love--but instead shown to be a wonderful thing. "Chester 5000 XYV" is the sort of erotic tale you can show someone without being embarrassed about because it isn't "dirty" in the same way pornography may make a person feel--this is fun, happy, and sex-positive. Don't get me wrong, this is book that is definitely only for adults, but it shows sex in a way more people should feel about it, not as something to be ashamed of, but something to enjoy! This makes it interesting how "The Furry Trap" is basically a complete 180 degrees from that.

Sexuality As A Nightmare 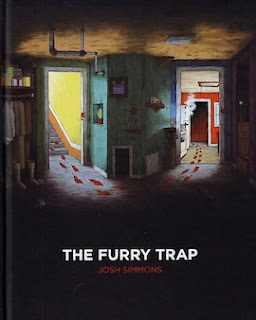 "The Furry Trap" collects a number of Josh Simmon's short comics he has done for various other publications or posted online. Not every entry in the book deals with sex, but enough do--and in a certain way--that a theme emerges about sexuality, namely, that it can be a scary, horrible thing. Some of those stories will now be looked at.

The first story is titled "In a Land of Magic" and starts out as a seemingly sweet tale about a male adventurer and a fairy-woman, before things get incredibly disturbing. You see, a wizard wants to kill them and the boy easily kills the wizard's dragon and paralyzes the wizard. Then the adventurer finds himself incredibly aroused by the fight and proceeds to rape the wizard in a way that is basically physically impossible, gruesome, and bloody. Afterward the "hero" declares how good has conquered over evil and his fairy girlfriend is clearly upset having witnessed all this, but he reassures her, "I love you." The whole thing made me feel incredibly uncomfortable and disturbed--which was clearly the point. In this story sexuality isn't something special shared between two consenting individuals, but a way the adventurer tortures his enemy. In this tale sex is a punishment, a violent act, and it sets the tone for the the rest of the stories in the book that deal with sexuality.

The story "Night of the Jibblers" is about these strange monsters that lurk out in the forest and eat people. Toward the end the protagonist of the story encounters a Jibbler touching itself to the fact that it and its fellow Jibblers are going to kill him. Again, sexuality as something related to violence, full of anger, and otherwise horrific.
One of the longest stories in the collection has a name that says a lot, "Cockbone". It is about a nightmarish future of war and scarcity where a strange family of a mother and her sons survives on the little food they can find and engaging in oral sex with the son/brother, Cockbone, a well-meaning but slow-witted man. Apparently something within him gets people high for hours and helps them escape for a bit from the terrible world they live in. However, once Cockbone suffers an injury to his member everything falls apart and before the end of the story everyone meets an unfortunate end in their attempt to fix Cockbone's penis and make life bearable again. Clearly, in this tale you have a very unsettling incestuous relationship with the characters not really thinking they are engaging in sex so much as an activity that helps them get out of their terrible, even if only for a little while. Sex in this story isn't violent so much as it is something twisted into the realm of being immoral from this family taking advantage of their simple-minded sibling/child.

The Complexity of Sexuality
Here we have one book that upon finishing reading it you feel good and another where once you close the covers you feel upset. "Chester 5000 XYV" is a read that leaves you smiling from the thought that all the characters have found pleasure that is both erotic and emotional thanks to finding someone they care about. "The Furry Trap" is full of stories with no happy endings, only violence and terror, with sex serving as at best a temporary escape from misery and at worst as a tool of violence. I wouldn't say, "The Furry Trap" is sex-negative so much as it just shows the absolute worst aspects of sexuality and relationships while "Chester 5000 XYV" shows the best (besides the brief animosity between the husband, Robert, and Chester).

As these two comic works illustrate, sexuality holds many potential uses as a storytelling element, be it to impart a happy story or one that is highly disturbing. While both are interesting works I personally preferred Jess Fink's stuff because it was happy and fun, and in an era where sexuality is often treated as a dirty or "wrongful" thing it is good to see something sex-positive.