My Girlfriend and I Share Our Reviews On "Injustice: Gods Among Us" 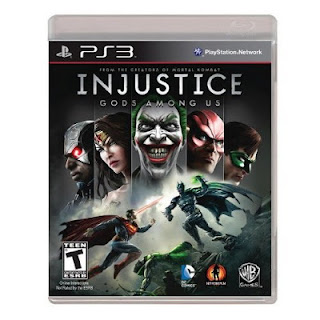 Opening
As I am a fan of doing, I bought and played a video-game some time ago around when it came out--and as she is a fan of doing, my girlfriend watched me play. That game was the popular DC-heroes-fight title, "Injustice: Gods Among Us". I shall now share our thoughts.

Main Thoughts
The basic plot of the game is that this is a universe where the Joker tricked Superman into murdering his wife, Lois Lane (who was pregnant with their baby), and Superman proceeded to kill the Joker and basically use his rage as an excuse to take over the world. This universe's Batman hates all of this of course so he brings the DC heroes from the "normal" world (which seems to be a pre NU52 one as Green Arrow is like his old self) to try and help fix things. This "fixing" is done through lots and lots of fighting.

I thought the game had a plot that was very silly, and threw in excuses for random fights, but I still found it fun. Samii felt that the game started out kind of stupid but while the fighting was dull the story bits were so absurd and silly sometimes that the game ended up being pretty fun. This is a game where Aquaman's special move involves his opponent getting eaten by a shark, so it isn't a stretch to say this is a silly title. As Samii isn't versed in the DC-lore that much, it is worth noting she was able to follow along pretty well as someone who doesn't know a ton about the heroes outside of the basic stuff--Superman is really powerful, Green Lantern flies and makes green objects, etc. 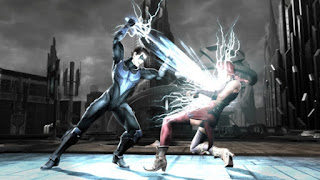 I enjoyed the segments where I would play the fights, which is saying something as usually I am not too good at fighting games. I cannot memorize all the combos and make the super-fast button presses required to do all those crazy "juggles" or whatever, but I can mash the buttons and still be pleased that the fights look cool regardless of how good or bad I am at fighting games. Samii actually cared for the fights the least as it would get old to see the same locales with the same folk smacking each other around--she did find the level transitions when a character knocks one into another "zone" hilarious though (nothing beats watching someone get thrown through an office building). While Samii wasn't too big on the fights themselves she did (as I mentioned) like the aforementioned cinema scenes that would occur. They were silly but interesting, and you grow to care about these alternate-universe heroes and villains and their troubles--except for Superman. At first the alternate-Superman seems a bit easy to empathize with, but over the time of the game he becomes more and more hilariously over-the-top evil that by the end of your play-through you are happy when the "good" Superman from another dimension beats-up this evil one.

It is worth noting how the game is kind of short, taking me all of six or so hours to beat, but the idea is you will do the fun mini-modes with various challenges or play against other players online so I suppose there is plenty of replay-value for those who want to do more fighting and don't care as much about seeing the story. 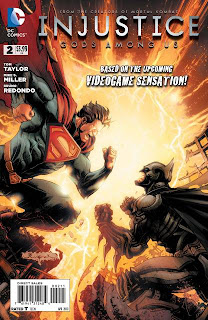 As as side note I thought I would mention how in a clever example of marketing and story-telling, there is currently an "Injustice" comic book which is a prequel to the game and fills in a few plot-points this game just makes reference to. It can be bought digitally and also has a paper-version coming out. This comic existing is both good and bad because the comic has been pretty decent, but I kind of wish the game would show more of--SPOILERS--How the one universe's Green Arrow died and how Batman's son Damian became Nightwing and sided with Superman after killing Dick Grayson--END OF SPOILERS. As things are though, it is still a fun story even if it is a bit mindless--sort of like the game.

Conclusion
While I found the fighting in the game interesting and challenging (while also staying fun), that was the part of the game that actually bored Samii the most. I suppose this is worth buying when the price goes down or renting from one of those Redbox kiosks.