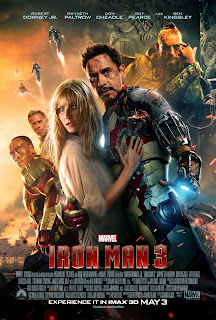 Iron Man 3 AKA Stellar Stuff
I saw Iron Man 3 this weekend and will try to offer a relatively spoiler-free review before having a small segment with spoiler-tastic thoughts. I think that makes sense seeing as how the movie has only been out in the US for less than 24 hours and you may want my opinion, but not want the flick revealed right away.

As this was a movie starring Robert Downey Junior you already know there was plenty of great acting on his part. Between the deadpan jokes, charm, and occasional dramatic moment or two, Downey is fantastic as Tony Stark, but as I said, you probably already knew that from his turn in the first two Iron Man movies and "The Avengers". Plenty of credit should be given to Gwyneth Paltrow for her work as  the energetic Pepper Potts however, along with Don Cheadle bringing impressive bravery to James Rhodes. Two actors new to the series do a bang-up job too. Ben Kinglsey is awesome as The Mandarin, with his growling voice and some surprisingly funny moments from his character too. Guy Pearce is also great as Aldrich Killian, bringing a level of pathos to his portrayal that works expertly. 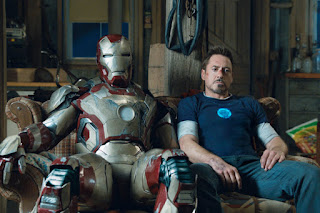 As has been hinted, this really is a movie about putting Tony back-to-basics and in his cave from the first movie, so to speak. Instead of always seeing Stark with his fancy and over-the-top gadgets throughout the whole movie, there are times when we see the character at his most resourceful and creative. Also, the film draws from the comics expertly while not holding itself hostage to them. All Iron Man comic fans know who the Mandarin is, and lots of people are familiar with the, "Extremis" story-arc that the comic had, but this film takes those elements and makes something quite new with them. Comic fans also may recall Aldrich Killian as a smaller character in the "Extremis" arc but he is much more interesting in the film.

There are some twists and reveals in the movies I knew were going to happen as someone familiar with the comics, but a few things did genuinely surprise me which is always good. Between the great action scenes, funny jokes, and awesome acting, Iron Man 3 is a delight. It is maybe not as amazing as the first movie, but that was just such a revelation, it is better than the 2nd one (which I actually did like quite a bit unlike a fair amount of people) however. You should definitely see this if you were a fan of the earlier Iron Man movies or enjoyed "The Avengers" as this builds off of all of that expertly--both in terms of continuing to grow the Marvel movie-brand and as its own stand-alone film. Go see it and be impressed!
4.5 out of 5 stars.

Now My Random Thoughts That Involve Spoiling The Movie
I was quite impressed by how Marvel and the press managed to keep the big reveal that The Mandarin isn't the true bad-guy a relative secret. I've seen some discontent on the internet with the idea that The Mandarin is little more than a faux-terrorist persona cooked up by Guy Pearce's character, but it kind of works if you just think about it. The Mandarin when he was first created as a comic character was little more than a, "Yellow Peril," straw-man who existed to further the idea of outsiders coming into our nation and stealing our jobs, causing us harm, etc. While the character has evolved over time in the comics to be much more interesting and not a mere racial stereotype, taking that original idea is kind of genius. Aldrich knows that by making a sort of scary terrorist he can be sure he gets all the military-money he could ever need. That's some pretty smart writing.

I and my girlfriend thought it also was good how the movie put a focus on Stark's emotional damage as well as physical. As she pointed out, you see all these heroes go through craziness like aliens and seeing people die, and they act like it doesn't phase them, but you know it does. Therefore, it was good to see Stark behaving like a normal human and having some panic attacks and nightmares from those tough times in New York City during "The Avengers".

Was I the only one who thought the whole deal of making Happy Hogan/Jon Faverau gravely injured was a bit meta? With the film having a new director in the form of Shane Black but Faverau still on staff it almost was kind of a weird, "passing of the torch".

I also loved how after the credits we get it revealed to us just whom Stark has been telling his story to, none other than his science-buddy Bruce Banner/The Hulk played by the always-good-to-see Mark Ruffalo! I was very happy to see the movie kept the idea of them being good friends going, what with their both being geniuses who might have trouble relating to other people either because they can be kind of rude (Stark) or turn into a gigantic rage-beast (Banner).