Half Comics, Half Art-Pieces, All Awesome AKA A Review of "NEGRON" 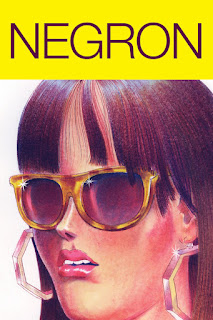 Jonny Negron (note how that's not a typo, there is a lack of "h" in his spelling of "Jonny") has been around for a bit in the independent comics scene making strips and art pieces. He has contributed to various magazines and comic anthologies but to my knowledge the publication of "NEGRON" marks his first truly solo book. Negron is a masterful illustrator of male characters and action, with the strip "Violence City" and its fighting-game-esque antics being a big part of this 80-page, glossy-paper book. However, it is his work drawing the female form that has garnered him much attention because of how he doesn't hesitate to draw beautiful, fully-figured women. Observe a piece from the book: 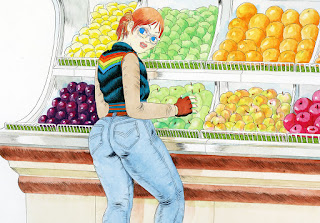 While many comic-strips or pin-ups show the slimmest of females within their pages, Negron  prefers to draw more larger-bodied women. You could say he is more realistic, but these women are still quite curvy, and wear clothing and makeup best described as "technicolor" by fashion-writer Annie K who styled herself after Negron's women for an article to dramatic effect. His females still have somewhat exaggerated proportions (large bust, prominent hind-quarters/bottoms) but in their hyper-realism they are just all the more gorgeous and still relatively rare in an industry that (with hero-comics at least) seems to prefer its female characters have improbable physical attributes to go with their impossible super-powers. Negron has shown he can draw slimmer women, but why would he when he can make works like this next one? 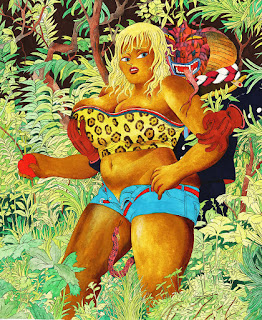 This above image is so packed with sexual and symbolic imagery it is mind-blowing  You have a metaphorical Eve holding the forbidden apple whilst a small snake crawls up her leg as a phallic symbol and the large snake-man hiding in the brush behind tempts her. It is clever, beautiful, and otherwise just one awesome piece within the comic. Just for fun let's look at another illustration of a pretty lady: 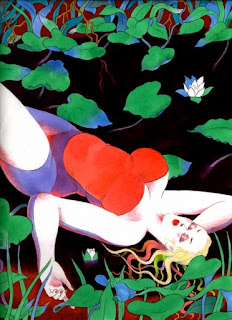 As I said however, Negron can illustrate a variety of things, and the strips within his self-titled book do not disappoint either. The aforementioned "Violence City" is a treat in its stark dark colors and exaggerated violence. A scene: 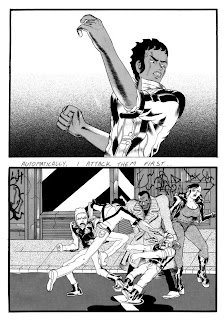 Negron is quite simply amazing and this book is a wonderful assortment of his work--albeit by no means a complete collection so much as a smattering of some of his popular stuff. This is definitely worth a purchase and you should go to Picturebox's website (they are the publisher) and buy a copy. In the meantime I also would encourage you to check out Jonny Negron's tumblr to see more of his great work.
5 out of 5 stars.
Posted by David Charles Bitterbaum at 11:45 AM