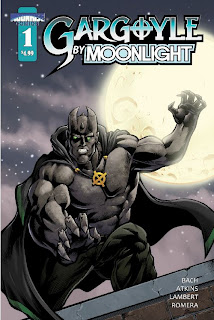 The gift and burden of continuity as illustrated by an indie comic
I've discussed the "Gargoyle By Moonlight" comic before (when talking about running into its creators at various comic conventions) but realize I have not actually ever reviewed it. I shall now correct that mistake and share my thoughts about this comic I was happy I bought as I feel it is quite fun.

One thing worth leading with is a question I often find myself faced with when reading super-hero comics that are independent and not a part of some large company. That question is, "What sets this apart from those hero titles at Marvel and DC?" After all, there are plenty of hero comics one can read from the "big two" and if a person wants heroes with a twist they can always turn to Image--plus Dark Horse is actually releasing more hero titles now too. Therefore, what makes this comic worthwhile compared to all those other titles? The fact that it has its own self-contained continuity, which is both a gift and a slight burden--plus that there is a lot of self-aware hilarity within the pages of "Gargoyle by Moonlight", are what makes this worth reading.

I mentioned Marvel and DC and while they do indeed have lots of heroes they suffer from so much continuity it can boggle the mind. You will pick up the first issue of a title but it actually features a character with years and years of back-story that can take forever just to get up to speed on. I'll have friends who see some of the super-hero movies that are popular right now and they'll ask me, "Hey David, I enjoyed that new [inset hero-movie name here] flick and was wondering where a good place to start would be if I want to read about that character/team, what do you recommend?" At this point I can only stare at them blankly and try to think of how in the hell I can get them into Avengers comics or Batman comics when the sheer volume of the stuff is insane. Generally I'll just end up recommending the more self-contained and/or alternate universe stuff as that requires less encyclopedic knowledge. They liked "Avengers"? Here, try "The Ultimates". A fan of the Nolan-directed Batman movies? Take this copy of "Batman: Year One".  Yes, continuity can be a good thing as it makes us feel like we really "know" these fictional characters thanks to all their stories, but its sheer metaphorical weight can be crushing to many folk. That's why "Gargoyle By Moonlight" is a good example of how to balance your continuity. 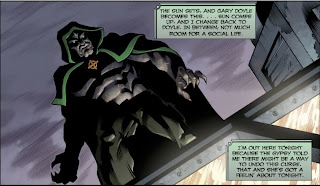 "Gargoyle By Moonlight" is one comic, a self-contained tale. It creates the perception of there being a continuity through references to past events, but it doesn't let all that bog it down. We don't have to worry about a six-issue series with the origin of Gary Doyle, we just are given a quick premier on how he ended up the way he is, and what he does as a Gargoyle at night (namely, fight crime and try to reverse the curse that makes him transform). Past events are referenced, but a reader doesn't have to seek out tons of back-issues to understand Gary, we get all we need to know from this issue. Also, in its self-contained nature this actually tells a complete tale without resorting to the aforementioned tendency mainstream comics have to be highly decompressed in their story-telling and stretch a plot out over months of issues. Doyle faces a villain who is powered by the sun (a clever counter to his nighttime-Gargoyle power) and defeats him. There is of course room left open for future stories, but everything is nice and clean in its encapsulating everything we should hope for in a comic within a single issue. Oh, plus this is a pretty funny read too.

"Gargoyle by Moonlight" both celebrates superheroes with its fun story of Gary Doyle fighting a villain, and also mocks them gently. There is a slightly sardonic sense of humor in Doyle talking about being a hero and facing all sorts of absurd conflicts. Often we'll have comics be utterly dry and rarely if ever address the absurdity they contain of these garishly outfitted individuals engaging in conflicts with one another. "Gargoyle By Moonlight" knows it has slightly silly situations and isn't afraid to address that fact--making this comic self-aware enough to be clever, but without outright breaking the 4th-wall as Deadpool does in his comics (a rare of example of comics being aware at their silliness to perhaps too great a degree).

Continuity can help one really feel immersed in the world of comics, but sometimes it is better to just have a really good self-contained story that can entertain you without doing hours of research on a character or team so you understand what's happening. "Gargoyle by Moonlight" is both nicely self-contained and self-aware to a point that what would maybe just be a good story is given that extra boost into being quite great. While it would be good fun to see the series continue, I hope if future issues are made they will strive to keep the focused nature of this first issue. It also helps that the artwork is quite well done, but it is the humorous writing that really drew me in along with the much-discussed self-contained aspect. I would recommend visiting the website for "Gargoyle by Moonlight" here at this link and purchasing a digital or physical copy of the comic. It's great fun, check it out.
4 out of 5 stars.
Posted by David Charles Bitterbaum at 7:44 PM