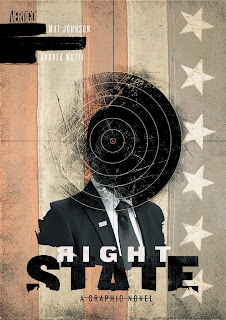 An Interesting View of the Present as Glimpsed in a Possible Future
"Right State" is an original hardcover from Vertigo that takes place in the relatively-close future of 2020 when the 2nd-ever black President faces the risk of being assassinated and an unlikely hero works to stop it.

The protagonist is Ted Akers, a conservative media pundit who says he is an independent but clearly "leans" right.  An ex-girlfriend of his who works for the President (whom is interestingly never named) asks Ted to help investigate a militia that it is suspected may post a threat to the President, and with Akers being a darling of the right-wing he makes the perfect undercover agent. 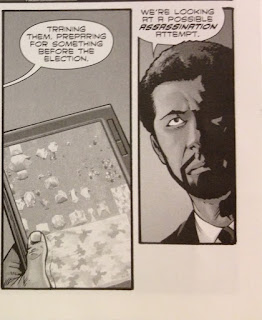 Writer of the comic Mat Johnson isn't really interested in prognosticating who this future President could be or what our world will look like a little under a decade from now so much as he is reflecting what society looks like today. We have a severely divided  nation, militias springing up everywhere (which the book makes mention of how they've been increasing ever since Obama was elected), and basically the country is one big wreck of people and politicians yelling at once another about how wrong the other side is.

Johnson does a good job at making Akers come off as a sympathetic character regardless of the reader's political views; while Aker may be pretty conservative and a hint xenophobic, he still is a caring individual toward others who wants his country to succeed regardless of who is in power. While Akers comes off well, a few of the characters seem a bit one-dimensional in being "good" or "bad". The main "villain" as it were is Ezekiel Dutton, a former Homeland Security agent who went rogue and joined a militia some time ago. However, he appears so little in the comic--instead being talked about highly by other characters--that when he does actually appear it is underwhelming compared to all the miraculous things we have heard about him. Whether this is intentional on Johnson's part to show that beloved "leaders" of groups rarely live up the hype or is just poor characterization I cannot say for sure. The main character is intriguing enough however that it is alright a few individuals in the book come off as lacking personality. 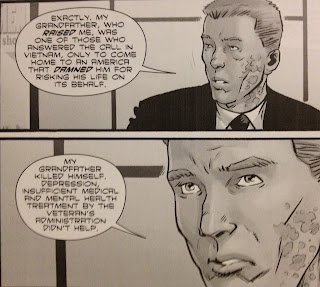 "Right State" is good read with a solid plot that only falters in how it makes some of its characters pretty bland. Enough good shines through the book though that I would definitely recommend it for a read. A paperback version will be coming out soon so it shouldn't cost too much either!
3.5 out of 5 stars.
Posted by David Charles Bitterbaum at 3:48 PM