The Joy and Misery of Violent Heroes: Musings on Steve Orlando's, "Midnighter," Versus Daniel Way's, "Thunderbolts." 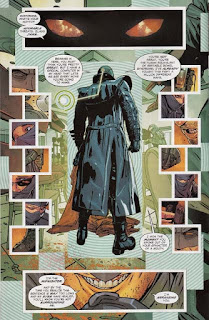 Superhero comics often trade in stories of violence. Not always, but a good deal of the time someone is getting punched, shot, stabbed, or otherwise smacked-around. One thing I've noticed though is that depending on the character's being featured (and of course who the writer is) that the tone of this violence can vary immensely. There is a big difference between when Deadpool is joyously shooting-up goons or the Punisher is doing it with his usual grim determination, to give one example. I read the latest, "Midnighter," books and it made me think about some comics I read long ago that are also about people with powers, but very different tonally--"Thunderbolts," when Daniel Way was writing it. Now I shall discuss these two different books that very clearly display this idea of how we react and consider violence can really vary.
Gleefully Attacking Evil 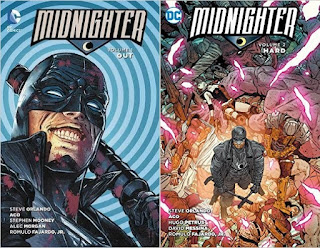 I liked reading the 1st and 2nd volume of Midnighter's somewhat short-lived series (it went a total of 12 issues). The book happily is kinda continuing with the, "Midnighter and Apollo," mini-series currently being released, but I haven't read it yet. While the character of Midnighter has for sure had a hard life of being experimented on (he doesn't even know who he truly is) and otherwise mistreated, he doesn't let it get him down. He's designed to be the perfect fighting machine who can see everyone's moves multiple steps in advance and he likes fighting. He gets a kick out of beating-up bad guys and then going home with a good guy (Midnighter is openly gay, and also takes immense pleasure from fighting homophobes).

The 1st volume of Midnighter is cheekily titled, "Out," and the 2nd volume of Midnighter is even more tongue-in-cheek with the label, "Hard," and follows our hero as he does what I just described, beating up bad guys and sleeping with good guys. In his effort to help the innocent, our hero fights a ton of people and kills many of them without a second's hesitation. We aren't necessarily supposed to support this as a reader, but it is for sure made quite clear anyone Midnighter kills is very evil, so he never feels bad either. When it turns out someone he thought he had a connection with and who was maybe going to be a potential boyfriend was in fact a villain named Prometheus the whole time in the first volume, Midnighter doesn't let it get him down. Even when Prometheus taunts Midnighter with the possibility of learning who he really is our protagonist states that he knows exactly who he is. It's self-assured and a very positive statement of individuality . 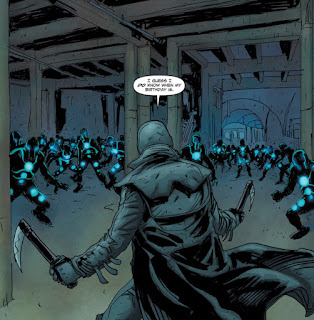 In the 2nd volume our hero continues to fight more villains, including the Suicide Squad and a DC-Universe version of Henry Bendix (he was a hero-then-villain from the pre-folded-into-DC days of Wildstorm, Google it). He then gets back together with Apollo (they had broken-up when the series began) and its a very peppy and positive comic...that also is full of Midnighter brutally murdering bad guys. Oh, the book also throws in two stand-alone tales from when, "Midnighter," had his own comic set in the previously-mentioned Wildstorm Universe and one is an especially fun story by Brian K. Vaughn that takes place backwards (the first page is the end, and the last page is the start). There currently is an aforementioned, "Midnighter and Apollo," mini-series going on and Steve Orlando is writing a number of titles for DC including a new, "Justice League of America," so the publisher clearly knows the man has talent. 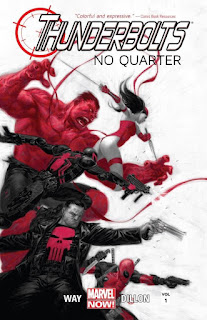 When it was coming out a number of years ago I talked about how I liked the critically-maligned run of Daniel Way on, "Thunderbolts," that later had some other writers come on board and lighten the tone until the book was repeatedly re-launched as Marvel of course loves to do. The biggest complaint people seemed to have was that all the heroes on this team of Thunderbolts seemed angry, dour, and otherwise unhappy except for Deadpool who injected a bit of enthusiasm into the story and was clearly there to provide at least a modicum of comic-relief. I didn't get the hatred for the series during the time when Way was doing it, because I could clearly see he was giving us a book about bad people doing bad things--but not because they liked it, it was because they felt they had to.

In the first volume collection of Way's run, titled, "No Quarter," this team made-up of folk like the Red Hulk (AKA General Thunderbolt Ross), the Punisher, Deadpool, Elektra, and other heroes known for their violence and sorrow (Deadpool may be really funny, but does have some depressing history without a doubt) goes around killing people they think are even worse than them in order to keep the World safe. They take no pleasure from doing so (besides the aforementioned outlier Deadpool), but know it must be done. These are, "Heroes," in the loosest sense of the word and while they are committing just as much violence as our previously discussed Midnighter they clearly approach it from a much different perspective. The whole thing is depressing, nasty, and shows violence as something sad and horrific. 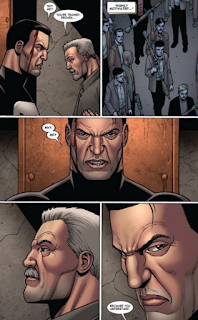 After the first volume of Way's time on, "Thunderbolts," and as he continued to write the book for a big longer the characters continue to behave awfully toward others and each other, but it always is shown as something sad and terrible--ain't nobody cracking a smile while killing people the same way Midnighter does, regardless of how bad the people getting hurt are--then as I mentioned other writers came and super-lightened the tone. Still, under Way's penmanship there's no joy in the pain here.

I suppose when it comes to our superhero stories and the tone they strike about violence context is key. "Midnighter," is full of violence, but carries with it a certain pep and whimsy, with it clear our hero is someone violent, but he's not dour and sad about it, so why should you, the reader be? Yeah, Midnighter faces some struggles, but he's still an optimist at the end of the day. On the flip-side of this coin, we have a squad of grim-faced killers who know they do something very gruesome--destruction of life--very well. These books who how the violent heroes we read about can be full of joy or overflowing with misery--it just depends on how the story is presented. I personally find all this fascinating to consider. I hope you do too, or I just wasted our time with this whole post. If you're simply bored or scratching your head after reading this, um...sorry?
Posted by David Charles Bitterbaum at 9:29 AM