Thunderbolts Mini-Run Review AKA Why is Everyone So Negative About This New Series? 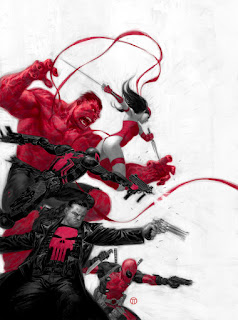 As part of "Marvel NOW," we have had a new Thunderbolts comic written by Daniel Way with art by Steve Dillon. The first issue got a decent-enough response from reviewers. My friends over at Nine Panel gave the series' debut a respectable 6 out of 9 panels in their review. We are now on issue three, and wow, the negativity has been overwhelming.

I'm no ray of sunshine, I declare my hate for a wide variety of comics, their characters, companies, writers, artists, printers, and anyone who was ever involved in any way, shape, or form with a Bluewater Press publication. That said, I find it odd this good comic is getting lambasted by so many people. When it comes to reviews for the latest issue, CBR maybe was the most positive with its review of 3 out of 5 stars. However, Comic Vine didn't like this comic much, Major Spoilers absolutely hated it, and even IGN which normally loves everything because they have no editorial freedom beyond, "Let's adore everything so companies like us, declared Thunderbolts to, "suck." What is the deal?
Some say the book is trying too hard to be grim and gritty. Others say the characters are either too dull except for Deadpool, or good except for Deadpool who is too annoying (either way you can't win). I've heard smart-ass remarks that Marvel made a team entirely of characters who are Wolverine, in the sense they are tough and not afraid to kill. Some people just don't care for Steve Dillon's art. Fair enough to all of this, these thoughts are reasonable-enough opinions. One thing that I recall reading somewhere that I just couldn't stand however was the idea that this was a bad comic because the characters are all impossible to like. Well, yeah, that's the goal.

This team of Thunderbolts is made up of people who do bad things; the only reason they aren't evil themselves is that they only do their bad things to other terrible people. Deadpool is a mercenary who despite trying to act like a hero sometimes is a killing machine. Elektra is one of the most dangerous assassins alive. Frank Castle has killed more people than most of us will ever meet. The Red Hulk is General, "Thunderbolt," Ross and if you know his history with the original Green Hulk it is clear he lacks most niceties too. Flash Thompson as Venom is maybe the only person who is the least bit likeable as he is simply a soldier feeling he is doing a soldier's work, but everyone else is just a wretched person--but on purpose. 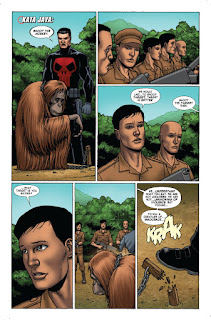 You aren't supposed to like these people, the whole point is to see that there is the thinnest of lines separating them from the people they kill. When the Punisher has rebels use a primate for target practice its supposed to disgust us and make us uncomfortable. When General Ross reveals he is using an ex super-villain as a pawn before planning to kill him, that is meant to make us squirm. These are people you wouldn't want to go near in your normal life, but if you're dealing with something even worse than them, well, you want this team of Thunderbolts helping.

I understand people don't like this comic being all dark, but the point is to show the sad fact that there are monsters that go unattended to by the big-name heroes because those lot are busy fighting cosmic wars or having super-battles among themselves. Those lesser evils such as a dictator of a country or his corrupt army can't be dealt with by the Avengers or Fantastic Four, they are needed to save another dimension or such. In the Marvel Universe for the smaller and uglier jobs you need the black-ops team of people who know how to follow orders, work together, and get their mission done even if in the process of doing so they lose their humanity...or at least let the team think this is case, even if we are the reader question just how ethical everything is. 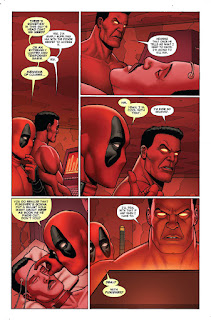 The Thunderbolts are not heroes, at least not in this incarnation. They are killers, terrible people, and this comic is going to follow them down the rabbit-hole of how far they'll go in their crusade of thinking the ends justify the means. I've found these first three issues to be of a great quality and look forward to seeing where this series goes next, even if many other reviewers don't seem to be as eager as I am to read future issues.

Give this version of the Thunderbolts a chance even if some of the negative reviews have put you off picking this up. Just remember you aren't reading about heroes, you're reading about people who keep pushing the question of how much bad you can do in the pursuit of good--and who may not like the answer when they "push" too far. Keep all that in mind and you should enjoy this just fine.
4 out of 5 stars (for all three comics).
Posted by David Charles Bitterbaum at 9:24 AM