Al Ewing is a Great Writer, As His, "Contest of Champions," and First Volume of, "Ultimates," Prove 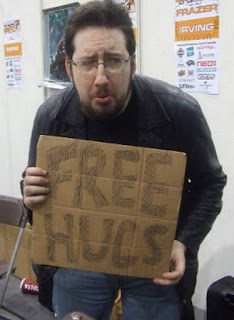 If you check my blog for posts that mention Al Ewing you will find I almost always have positive things to say about him. The guy is just quite frankly a great writer, and when he's on a book I at least know I don't have to doubt if it will be entertaining. Two of his more recent works that show this are the sadly short-lived, "Contest of Champions," and a book that actually tied-in a bit with the previous but also is a great series all it's own, his first volume of, "Ultimates." Both are books that when you consider their background have the deck stacked against them, but somehow Ewing takes a potential, "Junk hand," and makes a Royal Flush, if I may use Poker metaphors. Let's discuss his books. 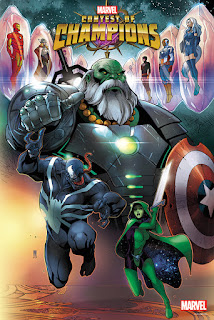 I was given as a present from my wife a trade paperback containing the first six issues of this series and managed to find the other #7-#10 at a comic shop. I wanted to read this because I heard it was really good and a bit like Marvel's old, "Exiles," series with a twist. You see, in, "Exiles," a bunch of characters from various Marvel dimensions had to travel to assorted worlds, with this book everyone from different worlds is brought to one place: Battleworld. Yes, even though Doctor Doom's Battleworld was thought to be destroyed at the end of the most recent, "Secret Wars," it seems it lived on. That already sounds a bit confusing but here comes the best/worst part--this comic is basically just meant to be a video-game tie-in.

That's right, this comic draws from the free-to-play (but full of stuff you can buy) digital game found smart-phones of the same name, "Contest of Champions." Now, comics that relate to video-games are a times good, and possibly even great (the early, "Injustice," comics are awesome), but usually when a comic draws from a game it isn't too much of a stretch to say people probably expect very little. Almost as if Ewing knows people aren't that concerned about his comic, he goes and just gives us something incredibly fun. Ewing makes it so that some multi-dimensional characters are fighting for power and using heroes from various Marvel Universes. This brings us characters from the ,"Regular," Marvel-U as well as known entities (The Punisher from the 2099 comics, Maestro, etc.) and some characters completely made-up for the comic. I'm a sucker for alternate-universe tales so I already am interested, but Ewing just makes things even better.
Throughout this series Ewing has some heroes from various dimensions engage in action-packed fights, give us humor, and brings in the latest iteration of The Ultimates as he's doing that book too. We get to see our heroes if they were further corrupted, our villains if they were better people, and then it all suddenly ends with the book's cancellation at issue #10. It's depressing because this title is just so darn fun, but I guess that's the way the cookie/universe crumbles.  At least another one of Ewing's great books is continuing (albeit with a recent relaunch). 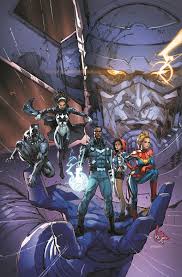 Having the name, "Ultimates," in a Marvel book carries a surprising amount of baggage. You see, back in the days where Marvel had the ,"Ultimate," Universe that world's version of the Avengers was called, "The Ultimates," and had an incredibly popular comic written by Mark Millar and drawn by Bryan Hitch. After that the name kept getting re-used for other concepts set in the Ultimate Universe, but after it ended during the, "Secret Wars," (there's that event again!) the whole place ceased to exist with the characters that mattered (e.g. Miles Morales) simply being carried-over to the regular Marvel Universe. What to do with the name, "Ultimates," then? How about making a team that handles threats to our dimension in what is both clearly a need for Marvel to keep the, "Ultimates," trademark active, but also a bit of a knowing wink to fans who consider how this team basically saves Universes but inadvertently  draws their name from a team that came from one that no longer exists?

This iteration of, "Ultimates," is still ongoing, but did have a re-launch after, "Civil War II," and now is, "Ultimates²," because somehow adding a, "Squared/²," to your logo makes more sense than simply using a 2. Anyways, after Marvel rebooted everything post, "Secret Wars," a lot of questions about continuity and the Marvel Universe itself were left dangling. The team in the Ultimates aims to address that and basically without Ewing I doubt anyone would have brought back-up how time was broken in, "Age of Ulton," and realities in general are pretty messed-up lately due to Marvel's constant events/how the Universe keeps changing (if we're giving an in-story reason). 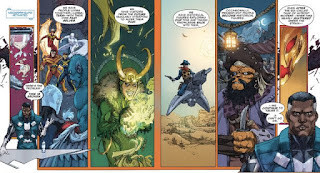 Having a team set-out to correct a broken universes and time-lines isn't only deliciously meta, it also results in a great story as Ewing arguably explores the very foundations of the concepts that make-up the Marvel Universe and the characters within it, whilst also turning them on their head, with one incredibly cool example being his taking of the infamous Galactus and having the team change his powers from destructive to restorative--that is, instead of eating planetary energy he now grants planet's life.

The, "Ultimates," that Ewing gives us are fun, smart, and has stuff I love like weird science as well as explosive action (and Kenneth Rocafort's artwork is awesome on the book too). I am eager to pick up the second volume of this first, "Ultimates," series and then pick up, "Ultimates²," even if it has a weird title that is a pain to type because I keep having to remember the ALT-code for it (you hold ALT and type 0178 on the number-pad, in case you're wondering). 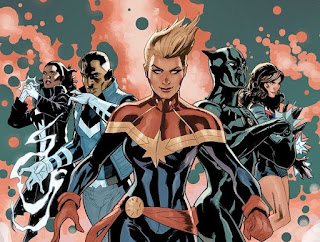 These two titles by Al Ewing both are just plain awesome and I give both titles I've read 5 out of 5 stars with no hesitation. I am excited to see what other works Ewing has in store for us and to read even more of his, "Ultimates." If you haven't read anything by Ewing yet I encourage you to correct that mistake immediately, and perhaps to do so with one of these stellar series!
Posted by David Charles Bitterbaum at 7:36 PM