Marvel's "Secret Empire" Doesn't Interest Me. Like, At All. 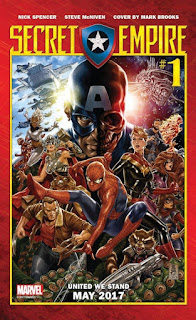 I saw the announcements about it, and all I could do was shrug. Marvel is doing another event--which is fine, they've done some good ones--but this just seems dull. Dubbed, "Secret Empire," I commented on the website run by my chums, "Comics Heating Up," about this, saying:

I’ve seen online a lot of talk about how this book is supposedly a political allegory–with the funny thing being people both left-wing and right-wing have claimed it proves their points. Any clever political allegories aside, I haven’t actually seen anyone excited for this event ITSELF, just people saying how, “Captain America is secretly a Hydra agent now,” is either ingenious or horrifically stupid. I myself think it was an odd thing to do–even with the excuse of it being a cosmic cube–and frankly haven’t read any solo-comics featuring Captain America since Ed Brubaker’s time on the book. This is my long-winded way of asking, is anyone actually interested in the event, or just how it proves their political point (with again, the irony being I’ve seen liberal and conservative people saying it is for or against them).

So yeah, is anyone excited for this? It is funny, because I love some of Nick Spencer's writing, ("The Fix," is stellar) but his, "Captain America," sounds like it has been one hot mess. Also, apparently even though it theoretically has generated headlines and sales, after this politically-charged, "Secret Empire," it seems Marvel may try and go back to a more, "Meat and Potatoes," strategy of shifting far away from politics, political allegories, etc. Whether this is because they don't want to alienate too many fans by appearing too liberal/conservative or if the the vaguely-crazy-yet-slightly-plausible theories are true about how Marvel CEO and former recluse Ike Pearlmutter doesn't want to do anything too edgy to upset his good chum President Trump, things will be getting less politicky (if that's a word). I dunno, I'm just going to keep reading the awesome Marvel comics that thankfully seem to be avoiding most events and hopefully don't get cancelled anytime soon, e.g. stuff like, "Moon Knight," "Unbeatable Squirrel Girl," and so forth.
Posted by David Charles Bitterbaum at 10:09 PM