Sometimes I'll just read something because I either hear it is good, or it looks weird and fun. In the case of the two books I'm reviewing here both of those things occurred, and thankfully I was quite pleased with the titles! 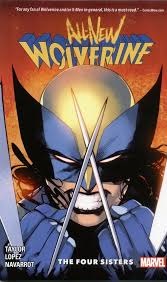 This picks-up with Laura Kinney/X-23 as the new Wolverine, and pleasingly doesn't require too much continuity-knowledge of old or new to enjoy. I say that because there is a lot to unpack here taking into account our heroine, Laura, has had her own comic series about how she's a female clone of Wolverine (don't ask) is apparently dating the brought-into-the-present-from-the-past version of Angel, and it is mentioned how Wolverine of course died not too long ago. Again, the book could easily collapse under all this continuity but thankfully says, "There is a lot of back-story, but we will tell you just enough that you can enjoy this book, and if you want to know more feel free to go read past stuff."

I shouldn't be surprised this book is as fun as it is considering I loved when writer Tom Taylor was on the earlier issues/"Years," of the, "Injustice," prequel comic. His talent continues to shine on this book as it discusses Laura/X-23/Wolverine/shehasmanynames fighting to save some flawed clones of her own that are being hunted by an evil corporation (you don't find many good or even benign corporations these days in popular culture). 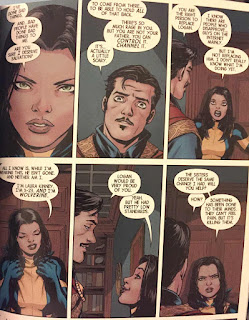 This first volume collects the initial six issues of the series and it all flows very well, with various guest appearances (Doctor Strange, The Wasp) making sense as opposed to feeling especially forced. It is a great read and balances drama, humor, and action superbly. Again, Tom Taylor know what he's doing. Apparently the 2nd volume shoe-horns in that annoying, "Civil War II," event, but still is enjoyable for the most part. After loving this first volume I'll be sure to try and check it out as well! 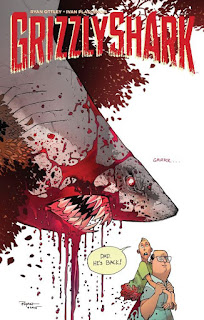 This book collects all three issues of the insanely violent, silly, and otherwise delightful, "Grizzlyshark," comic. The idea of the comic is that we have a shark, who survives on the land. As with regular sharks he can smell blood from miles away, and the comic consists of him eating a number of people before it becoming apparent there are in fact many grizzlysharks and they all are quite hungry. As if things couldn't get any weirder, in the 3rd issue we get to witness as a grizzlyshark fights a seabear. Yes, this comic is utterly absurd and its knows it.

The idea of grizzlysharks and seabears is so over-the-top you either have to play it completely straight or go all-out with being silly. This books takes the latter approach and has such wild things as a man with half his torso eaten managing to keep fighting the shark, a feral and cannibalistic baby, plus as I mentioned, freaking sharks that live on land and a bear that lives in the water! It is a concept as dumb as it is genius and the book manages to make it work wonderfully.
This first volume of, "Grizzlyshark," is stupendous and I hope creators Ryan Ottley and Ivan Plascencia continue to give us more magically twisted yarns about these creatures. In the meantime, I'll be careful not to cut myself in the water or on land (so nowhere, basically)!
5 out of 5 stars. 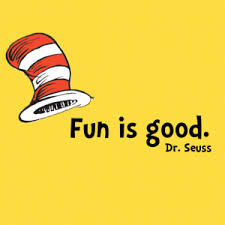 As my two 5-star reviews illustrate, I enjoy having fun, and there is clearly nothing wrong with some random reading to have the good times I like.
Posted by David Charles Bitterbaum at 4:35 PM