A Trade-Review of the NU52 AKA Demon Knights Volume 1 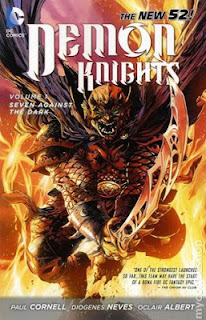 Background and Why I Wanted to Review This

"Demon Knights," or if you want to be fancy and use the full title, "Demon Knights Volume 1: Seven Against The Dark" is book that was a part of the "New 52" re-launch and has done well enough to still be going today. This trade collects the first seven issues and features the main reason I picked up the trade, Paul Cornell as the writer. I wasn't interested enough in the book to pick it up when all the NU52 books were debuting as there was just so many that some I figured I would wait to perhaps follow in trade that seemed less, "crucial" to the DC Universe.
Now, despite this book tying-in to Stormwatch in the sense that centuries later the Demon Knights evolved into that organization, this is set way in the past from almost all the other DC books (oh, and Madame Xanadu is around here and she's in Justice League Dark also, but seems like a completely different person there so who knows what's up). Therefore, I felt I could miss the early and current issues of this and read the trade, which I was picking up pretty much purely on the strength of Cornell's name alone (you make the stellar mini-series "Wisdom" and its follow-up "Captain Britain and MI:13" and I'll give almost anything new you write a chance). Now then, what did I think?

Main Review OR To Sum-Up the Book in One Word, Decent
This tale of the Demon Knights is not bad, but lacking in anything to label it as "stellar". I had already picked up the trade before reading J. Caleb Mozzocco's review where he absolutely ripped the thing to shreds, so I was concerned as to whether or not I'd like the book. While I don't think the book was, "trash," I can agree with Mozzocco that at times the visual story-telling is disjointed and messy. There are other things that bugged me too. One thing that was both impressive and seemed rushed would be how within what would have been the "first issue" all the main characters are introduced along with their enemies. That is pretty cool how Cornell managed to do that but throughout these seven issues it seems we never get to know too many of the main characters well, with everyone getting little bits of "the spotlight" but never that much--except perhaps the Demon Etrigan who is around a fair amount of time.

Speaking of Etrigan one thing that bothered me might be considered insignificant to some readers and inexcusable to others--he doesn't speak in rhyme! Okay, sometimes he does but only at dramatic moments, otherwise he speaks just normal ol' English. As someone who is used to see him rhyming or making sonnets in many of his past appearances it is a bit odd. He still is an enjoyable character however, with his mean-spirited nature and basically being a villain who only does a few good things because his lover, Madame Xanadu, asks him to. It is also amusing to see Xanadu act like she loves Etrigan and not his human alter-ego, Jason Blood, and then tell Jason Blood she is in fact playing Etrigan. I figure the truth is she cares for both, in a way.
Vandal Savage also appears in a role styled much more in the "comedic relief" vein than other times in the "old DC" where he was kind of an evil master-mind--which is also how he is portrayed in some later issues of DC Universe Presents--so I suppose at some point between medieval and modern times ol' Vandal must have gotten smarter and more evil (although he is still pretty evil in Demon Knights in some of his actions).

There are other characters too but I can't remember much about them other than that there is the guy who invents stuff, the lady who rides a horse constantly, the Wonder Woman-esque Amazon, and a female knight heavily drawing more from the Grant Morrison, "Seven Soldiers of Victory," than the older versions of the character.

The art is pretty messy, as done by Diogenes Neves, with the storytelling being unclear a fair amount of time even if it looks kind of pretty. However, some of the characters fighting are velociraptors in armor with knives, so that is--as I believe the term goes--pretty freaking awesome--and excuses the lack of clarity some. Observe: 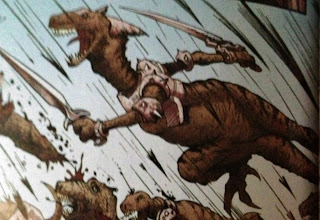 The plot itself is pretty weak; we have an evil Queen (and her sorcerer minion) who wants to attack a city and has to take out a little village along the way which happens to be inhabited by our heroes, battle ensues, etc. One saving grace is how at the end when we see the ruined battlefield someone tells the heroes, "Here today, you have won a great victory," and the irony of such a statement is abundantly clear. The thing that mainly carries this though is how some of the characters--such as the aforementioned Etrigan or the humorous Vandal Savage--are fun to read. With art that is often confusing even if it looks decent, and a plot that is quite dull, Cornell's characterization of some of the characters at least makes me want to keep reading.

All-in-all this is a decent book, as I said before. I'm interested enough to want see what happens in the next volume of the story but if that doesn't impress me a bit more I may not bother with any future adventures of the Demon Knights. Still, if you are interested in the past of the new DCU this might satisfy your cravings for swords-and-sorcery.
3 out of 5 stars.
Posted by David Charles Bitterbaum at 2:57 PM