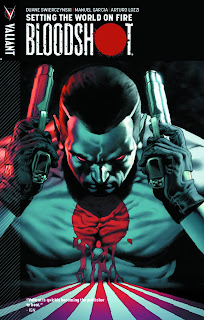 Let's do a review of the 1st trade from the series, "Bloodshot," put out by the new publisher Valiant comics. Well, sort-of new, they existed before and these other folk bought the line and have been putting out some quality stuff since. I haven't read too much of it for various reasons, thinking I would pick up the trades. Well,  I did just as I said I would and have enjoyed this first volume of the kind-of super-hero Bloodshot. Let's discuss!

Bloodshot is a character I never read the old material of, so I cannot claim to know much of anything about his 1992-era incarnation. This new version however is pretty cool. He isn't so much a super-hero as he is a marvel of science. He is basically a man pumped so full of nanomachines/nanites that as long as he is kept fed with protein he can heal from essentially any wound and have his mind messed with as easily as reprogramming a computer. This leads to how Bloodshot basically has no memory of who he truly is, due to the many times he's been used by the US on missions of questionable legality and ethics before having his brain wiped.
Duane Swiercyznski writes and does a good job keeping the momentum going. The trade's first chapter/issue sets up the concept and by the end of the second, Bloodshot is running loose. The third and fourth sections show us a dark secret kept by the government about how the nanites can go horribly wrong, and introduce us to another powered-individual who can send out electro-magnetic pulses and basically fry anything electronic within a decent radius. Seeing as how Bloodshot is powered by machines you can see where the government's need for, "Pulse," as they call her, comes from as she arguably is the only person who can render Bloodshot powerless and possible to kill. By the end of the trade however a team of sorts has been formed between Bloodshot, Pulse, and another female who is an ex-soldier Bloodshot meets along the way named Kara.

Manuel Garcia provides some stellar artwork, with a bit of a Neal Adams-feel to it. I especially like how in the flash-back sequences (both real ones and fake memories implanted into Bloodshot) the style changes to a softer-look as if to represent the haziness of the past.

I enjoyed this comic a good amount. Between the mystery of just who or what Bloodshot really is, the interesting characters we meet, and the well-drawn action it is a fun read. In conclusion  I'd check this or some of Valiant's other offerings out if you want to expose your eyeballs to some enjoyable images and story, and isn't that the right thing to do? Your eyeballs must be tired from staring at the computer so much (not that I'm complaining if its my blog your computer is showing).
4 out of 5 stars.
Posted by David Charles Bitterbaum at 7:34 PM