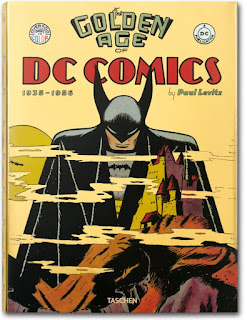 Art-book maker and publisher Taschen puts out some damn pretty books. Whether its one of their "sexy books" about legs, a huge hardcover about James Bond movies, or a title collecting beautifully-done Polaroid pictures (why look here, a review by me of said book!) they put out some impressive stuff. Therefore, you can imagine I was interested when I saw one of their new releases was "The Golden Age of DC Comics". Considering how gorgeous their titles always are I knew the book would look good, but would the text be informative too?

First off, let me say this book is jam-packed with information. If you wanted to know about DC Comics in the Golden Age (well, to be exact the entities that would become DC) this publication will fill you in. From pre-Superman works to of course the big-name releases such as "Action Comics #1" the opening parts of the book are intriguing. I myself however enjoy the writings about later golden age titles that people may not think of these days. After all, who remembers the original Guardian (all of you who thought of the one from "Seven Soldiers of Victory" are off by a number of decades), or the time Superman, Batman, and Robin displayed how having your own, "Victory Garden," can help support our troops? Classic propaganda such as that is so fascinating in its camp value today I can't help but love it.

All the old war-themed comics, cute-animal comics, and western-themed comics are discussed too--plus there is some history of MAD at the end of the book talking about before it became a magazine and was a comic. In what is now bittersweet due to his recent passing, there is also an interview with Joe Kubert as the man himself drew many golden-age comics (for example, he created Sgt. Rock.

If I were to have a complaint about the book, I can't recall much if any discussion about how many of the creators of these comics died and are dying without recognition or funds because back in these days it was common for a comic company to screw over creators--with the practice continuing in the present (Hello, "Before Watchmen"). Hell, the Siegel estate is still fighting in the courts with DC about Superman to this very day.

Seeing as how DC gave Taschen the rights to publish all this fascinating stuff about their "Golden Age" of comics however I imagine the company wouldn't be too pleased with the book calling the company out on such matters. Therefore, I can't hold the lack of discussion about the terrible way DC has treated some of these creators against Taschen. Still, it can feel a little awkward to read about the creation of Superman, Batman, and all the other golden-age heroes and then log online and read about how DC has "thanked" these amazing people in horrible ways. If you think of this book as more of an overview of DC's comics and less a fully-fleshed out history it isn't as much of a problem, however.
This book is just plain beautiful to look at as all the Taschen books tend to be, and is full of information. Putting aside how sometimes it feels a little selective in the history, this is a marvelous publication and definitely worth reading for fans of comics who are curious about the origins of some of their favorite DC superheroes.
5 out of 5 stars.

Side-Note: In the interest of journalistic honesty it should be noted I was furbished a copy of this publication for review--that never impacts the fact I'll be honest about if I loved or hated something, however.
Posted by David Charles Bitterbaum at 4:13 PM